Humans from Palestine: The Karimeh Abbud Photography Award Exhibition showcases photography works by ten artists who employ a diverse approach in storytelling to create expressions about society and life in current day Palestine. The exhibition brings together the works of artists from Gaza, historical Palestine, Jerusalem and the West Bank. Working with themes of space, time, feminism, materialism and questioning notions of the local and the personal, the artists take us on a journey into the various realms and realities in Palestine today.

Through an effort to raise awareness in Palestinian society about the early modern Palestinian photographer Karimeh Abbud (1893–1940) and her contribution to cultural life in Palestine before the Nakba, Dar al-Kalima University College of Arts and Culture has launched the Karimeh Abbud Photography Award. In its first edition, DAK is collaborating with Qalandia International III. 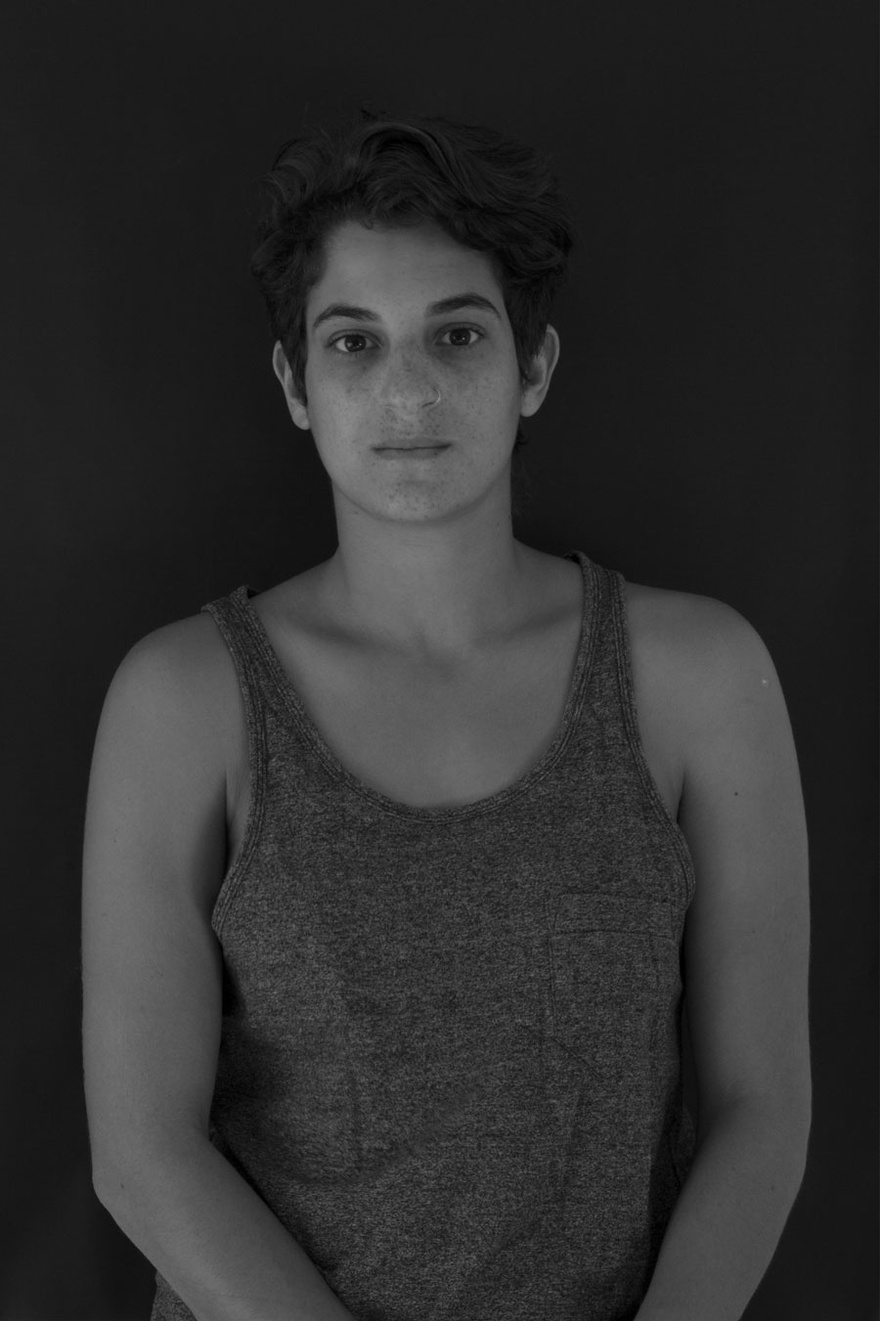 These portraits seek questions about what it means to be Palestinian and to live in Palestine today away from the daily conflict and confrontation with the Israeli occupation. What does it mean to be an average person who could be nice or boring or a craftsman or even a thief. More importantly, these portraits aim at representing the Palestinian away from any ties, connections or expectations with themes and specific subjects. In short, it is an attempt to break the stereotype and overused image of the Palestinian person. 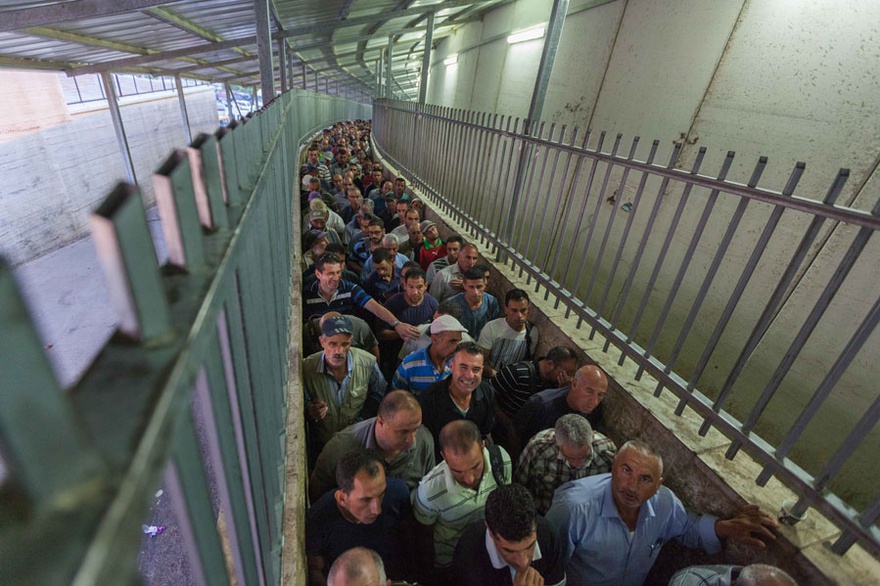 Workers waiting in the early hours at the checkpoint to cross inside the Green Line in search of work. 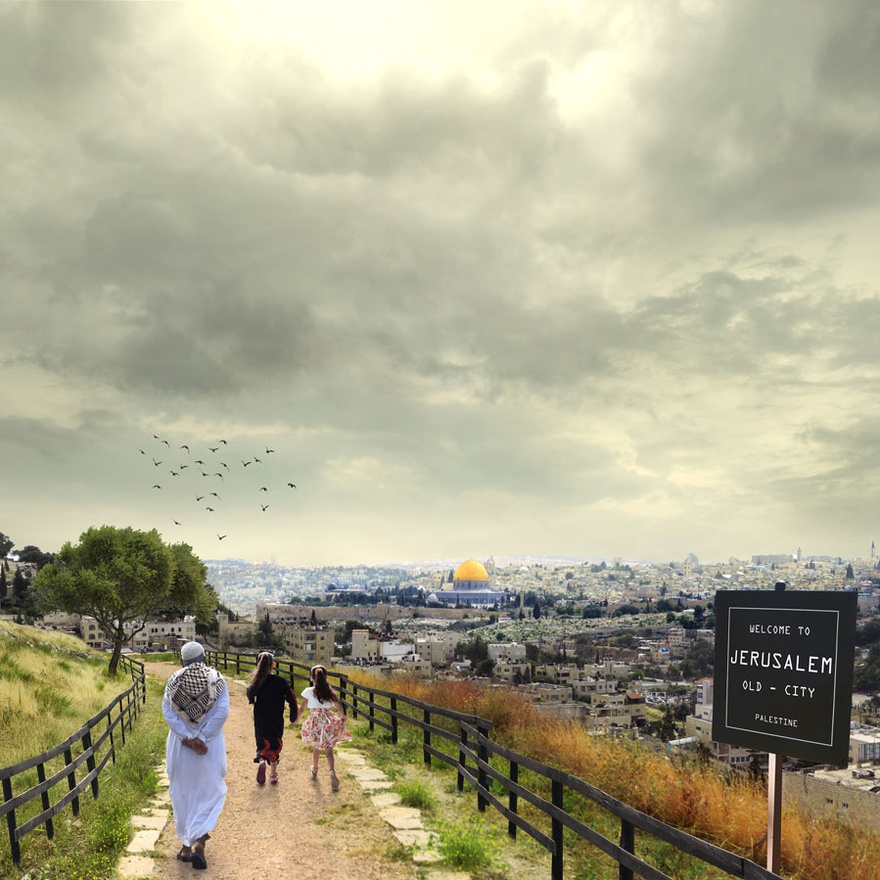 Prayer of the Returnees

A conceptual work tackling the Palestinians' dream to return to the holy land. 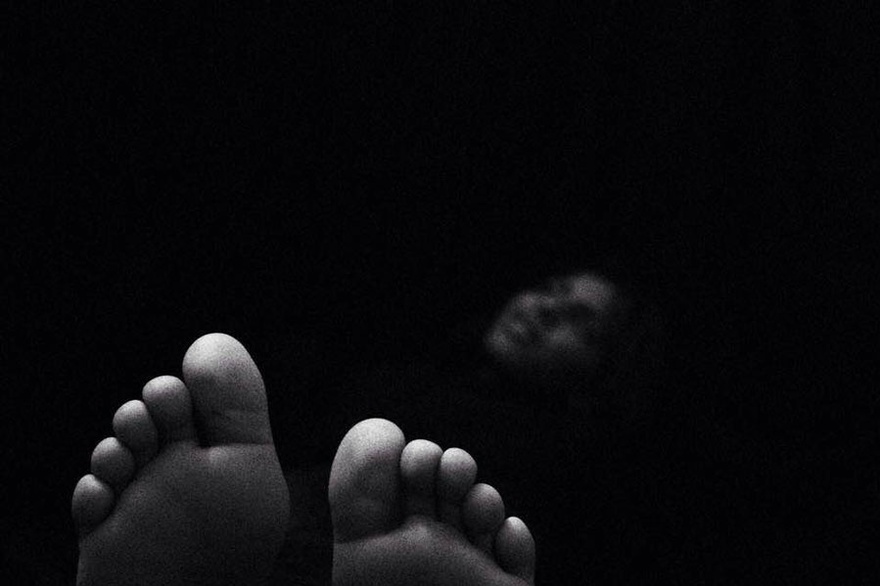 A young woman from a refugee camp who is an aspiring model met with the difficult context of camp reality. 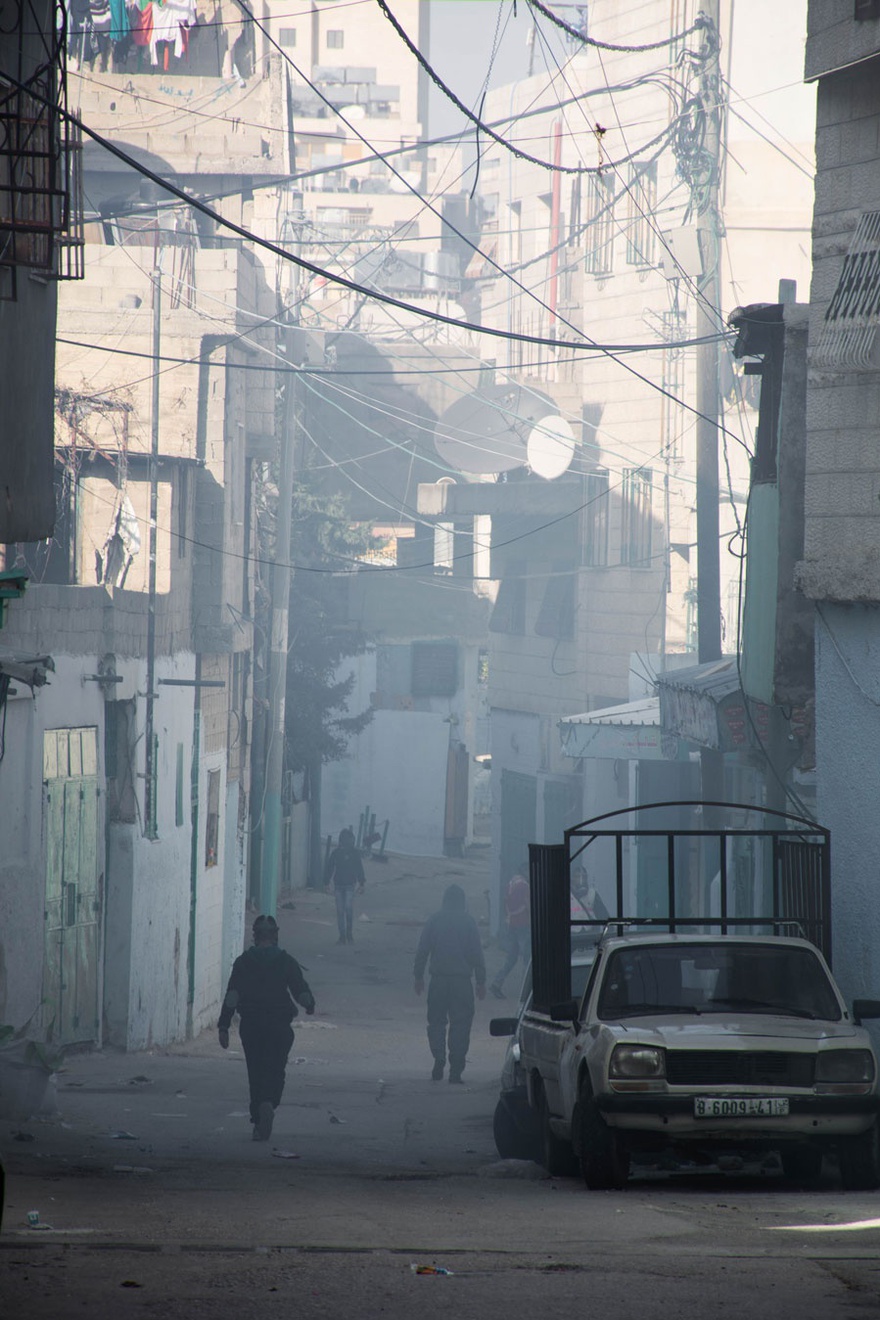 In this photograph I bring to light the suffering of Palestinian refugee camps during the Israeli military incursions manifested by tear gas, the crowdedness and the intense architecture where the refugees live. 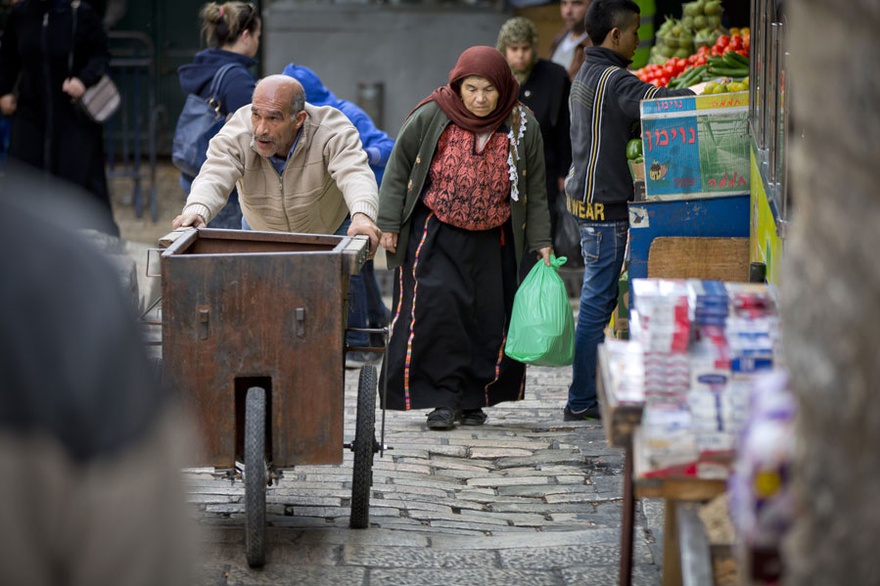 Life of a Jerusalemite

A man searches for his livelihood among the crowds. 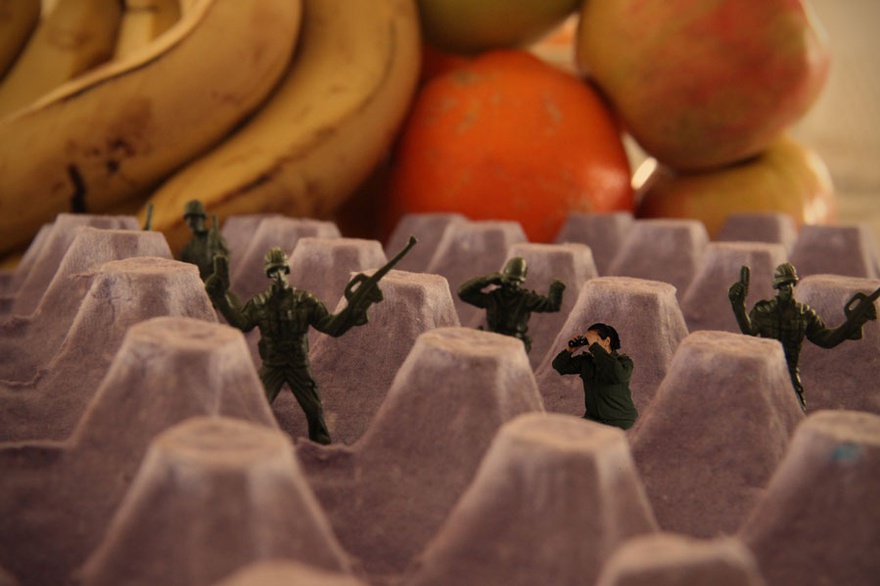 From an early age our children's games are tied with war until we realize that war is real. In this work I tried to create the war environment inside a home as I attempt to be a part of this game. 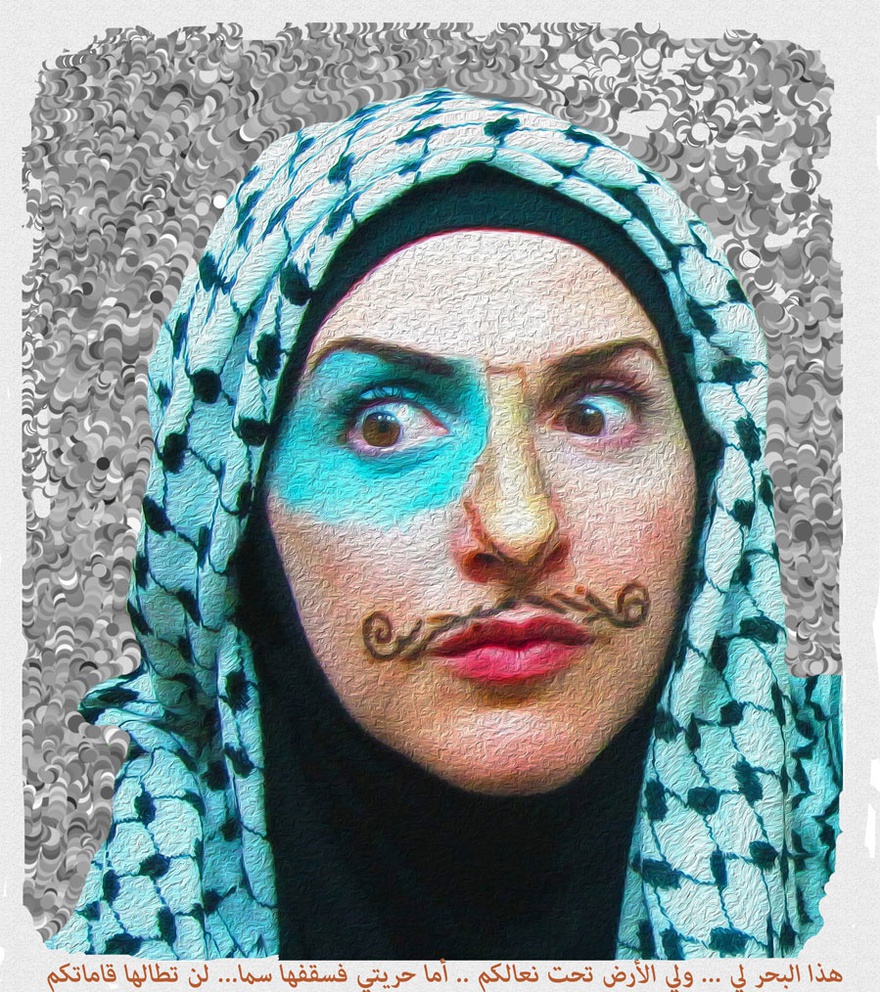 Inspired by Salvador Dali who used to say: 'I am Surrealism' and as a form of reproduction of his mustache, I produced my collection Lipstick Pen in which I transform images of my face as a silent expression of surrealism by painting it with lipstick, eye shadows and eyeliners. 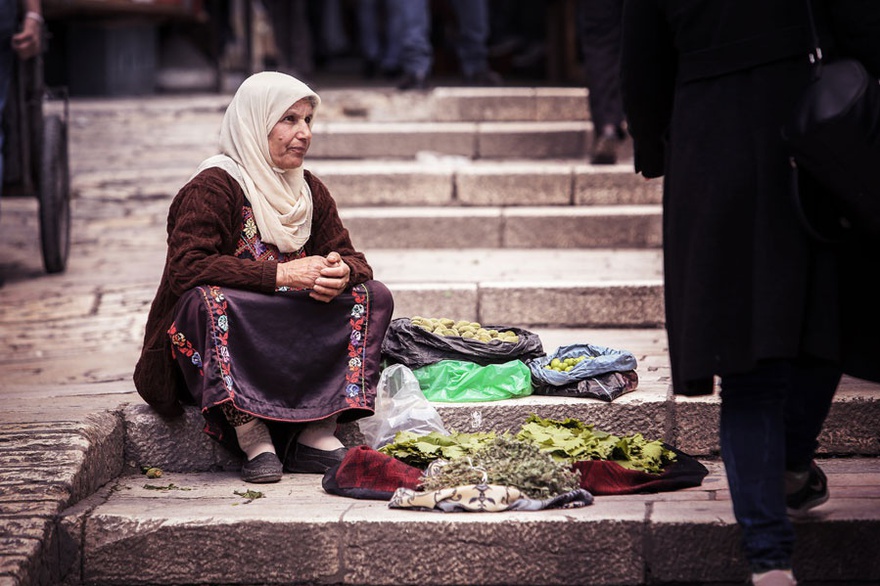 A woman sitting on the steps in the Old City of Jerusalem selling her produce. 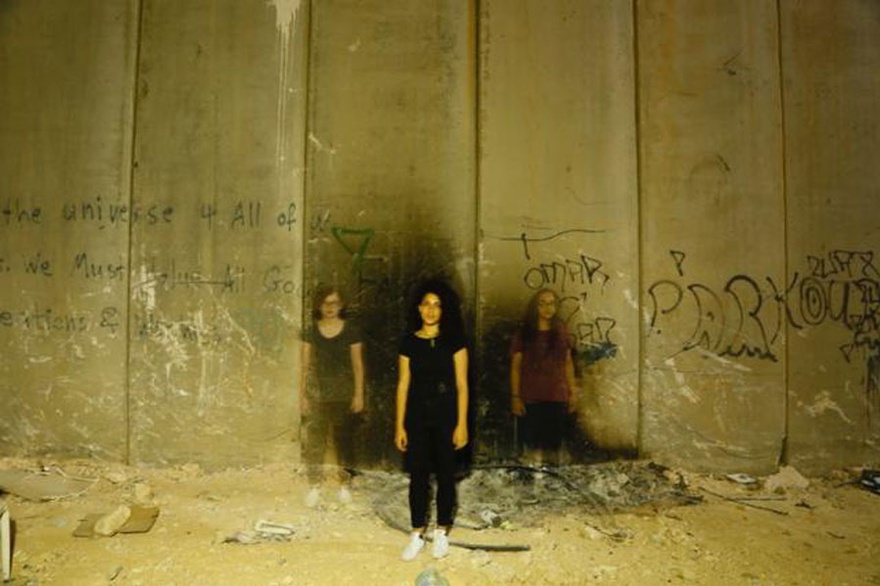 Alone in the Darkness

Palestinian teenagers lose their friends and their freedom is taken away from them.

After Ala completed his BA in fine arts with specialization in photography from Bezalel Academy in Jerusalem, he decided not to become a photographer but to focus his work on researching the meaning of photography and the process of its capturing, including: time, space, event, the photographer and photographed and the relationship between them. Records of archival and historical nature are of great interest to Ala. He works on reproducing texts, videos and images. He recaptures and re-forms them and sometimes he erases them all together, aiming to create new images and to identify new ways of reading and seeing archival materials.

Luay studied Mass Media at the Bible College in Bethlehem. He works as a photography journalist in Palestine with a number of local and international news and press agencies.

It is possible for me to say that I am entirely Gazan. I was born in 1993 in Jabalia refugee camp. The camp shaped the person I am today.  I studied in the camp's schools throughout my school years. I then obtained a Bachelor's degree in English Literature from Al Azhar University in 2014. As a child, I loved and was always inspired by photography. I was content with observing the world around me from a distance until I had become part and parcel of it. The brutal reality around me and my passion for photography created a paradox within me and an overwhelming urge to contribute to this world through art.

I have been interested in photography since I was fifteen years old, when I had a little SONY camera. Until now I keep family photographs and short videos that I shot with that camera. Later, and after saving the salary of three whole months working for the Red Crescent Society, I acquired a professional Canon camera and embarked on learning the art of photography through the internet and later through the Freedom Theater where my skill had noticeably improved as a photographer. I won second prize in a photography contest that UNICEF sponsored under the title The Clothes Line. However, I was later disqualified for not having a refugee card.

Photography had given me a way to create and express myself. I aspire to take photographs, which had never been taken before.

Born in 2009 in the village of Jisr Al Zarqa in the province of Haifa. I am a second year Art (Photography) student at the Betzalel Academy. I am a volunteer at the Baladna Association in Haifa. I use various styles of photography to express social and political issues from my own personal perspective.

Born in 1994, Mohammad Shaloudi graduated from the Dar Al Aytam High School in the Old City of Jerusalem in 2012. He is currently pursuing a diploma in Cinema and TV Skills at Dar Al-Kalima University College of Arts and Culture. He earned a certification in Advanced Photography from Afaq College in Jerusalem where he underwent 200 hours of theoretical and applied photography studies. Mohammad has worked on several student film projects. He also worked on short and feature length documentaries as well as feature films. Among these are the documentary films Ahraquo Al Radi'ea (They Burnt the Infant) and the feature film 'Ala Qayd Al Hayat (Alive) in 2016. In addition he worked on a documentary series (7 episodes) about Palestinian Prisoners. Currently he is working on documentary stories for Al Jazeera Net telling human stories from Jerusalem's Old City.

Born in Jordan to a Palestinian father and a Lebanese mother, Nihaya  Al-Haj is a 24 year old Palestinian woman. She graduated from the Latin Patriarchate School in Beit Jala and set out to study Chemistry at Bethlehem University where she discovered that Chemistry was not what she was interested in. Thus, she transferred to Al Quds Open University to study Business Administration, however, she was unable to find herself in that field. She decided to take a chance with her interest in painting and pursue it professionally. She enrolled in several programs to study Graphic Design in Bethlehem where she was attracted closer to art and its concepts. Finally, she enrolled at Dar Al-Kalima University College of Arts and Culture to pursue her passion for Art. Perhaps the ability of art to change the world had led her to study art. As she continues to find her own style of artistic expression, she continues to work on art projects using various mediums such as painting, photography, videography and editing.

Born in Jerusalem in 1985, Reem graduated from Al-Quds University with a degree in Dentistry. Abstract painting is where her primary talent lies, although she is proficient in writing, photography, poetry and editing. She has experimented with different forms of art to express her ideas. She is open to learning anything that would enrich her culturally.

Saleh Zghari
JerusalemBorn in Jerusalem in 1995, Saleh studies at Dar al-Kalima University College of Arts and Culture. He works as a cameraperson with al-Jazeera crews.

Waseem was born in Jerusalem in 1995. He completed a photography course in digital photography at the Youth center in Jerusalem. He is currently studying at Dar al-Kalima University College of Arts and Culture in Bethlehem.