Outside The Gates Of Heaven 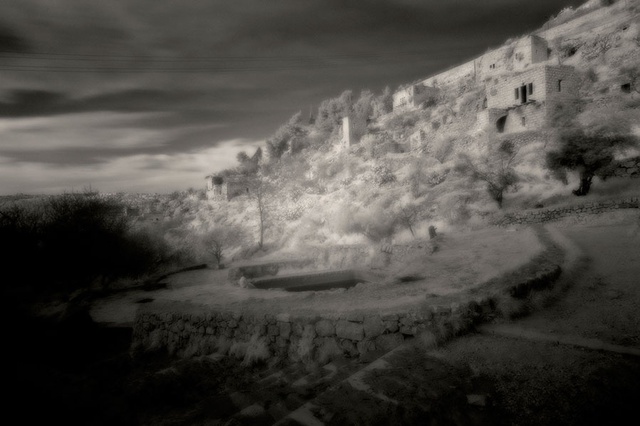 The Jerusalem Show ('Ala Abwab Al Janna) borrows its English title from the vivacious and atypical formats of the Saturday Night Live show and the Muppet Show, whereas its Arabic title 'Ala Abwab Al Janna (Outside the Gates of Heaven) references the sacramental veneration that is bestowed on Jerusalem. A similar ludicrous dichotomy is ostensible to Jerusalem's inhabitants (including us at Al-Ma'mal Foundation).

It is quite confounding to be literally inside the city walls, in physical contact with its shrines and monuments, yet not able to liberate ourselves from our purgatory: neither able to be part of our natural extensions into the West Bank and Gaza; nor desire to comprehend and be content with our hopeless situation, the remorseless occupation, and the unlawful annexation to Israel. Hence the pun on the 'Show' format.

The Jerusalem Show is neither a biennial nor a one-time event. It is neither a large-scale show nor an international grand exhibition. We like to see it as an attempt to intercede between the apocalyptic decadal tides of upheaval under which the city kneels, stealing time during the ebb of violence (yet sunk neck-high in hatred and discrimination) to wage an action of covert resistance to the forced hegemony of one creed and one people on the city. In a way it can be perceived as a political action, and so we tried to garner as much support as possible from institutions, organizations, youth centres, clubs, etc., which operate in the city. The Jerusalem Show presents works, performances, and interventions throughout the Old City as unique actions that promote a re-reading of the city in a creatively open, accessible, and interactive manner.

From 20 to 30 October 2007, edition 0 of The Jerusalem Show was launched. Sixteen artists from Palestine and six from abroad presented their work (painting, photography, sculpture, installation, sound, and video) in various locations in the Old City. The audience participants were taken on guided tours into the city, through its narrow streets and alleys, up onto rooftops and into community centres and clubs, stopping for a coffee break at Haj Ahmad Al-A'raj's coffee shop, after passing through Hamam Al-Ain to see the works of the artists as they negotiate their way in this overwhelming city.

Jerusalem is an oxymoron, an aporia of faiths, ethnicities, and cultures. The unacknowledged and insufferable multiplicity of the city has cost a lot of lives – not that many more lives all over the world have not been wasted on far more trivial conflicts and issues. Yet what's perplexing is that it is the 'means to an end' that lie at the heart of the conflict. The 'means' – as in the physical entities, the symbols, the shrines, the monuments, the walls – are what count and what people and governments kill and die for. It is the shells, the covering, the casing, the skins of people and not what they are and what they stand for. It seems that what matters is how Jerusalem seems and not what it is; hence the Israeli slogan (that sounds like a broken record) 'united Jerusalem – the eternal, undivided capital of Israel.' In a simple exercise, just criss-crossing the city from end to end, north to south, east to west, one would find it impossible not to notice how un-united the city is and how caustic the tensions at the seams. I am not only referring to the iniquitous east-west (Palestinian-Israeli) divide but also thinking of the convoluted relations between the different communities, ethnic groups, convictions, and nationalities.

In negotiating an action in the city such as The Jerusalem Show, one would need to navigate a very complex terrain, colluding with some, persuading others and, most importantly, avoiding uncharted territory.

This brings to mind an attempt a few years ago to organize an exhibition in Jerusalem in one of the sites usurped by Israel along the Green Line (which used to be part of no-man's-land before the 1967 war). A parachuted vulgar logic of manifestations prevailed and, as much as they struggled to (artificially) superimpose a dialogue and an engagement with the city and its context, in my humble opinion, all their endeavours hit an iceberg instead and sank disgracefully. This in no way means that I, or we, at Al-Ma'mal claim that we're able while others are not or that we have the right while others are wrong. My aim is to re-define our work and position in Jerusalem from that of artistic space-fillers to activists. In a context and time such as this, art, culture, activism, manifestations, political protest, social work, etc., are all part of our actions and our understanding of what a show in Jerusalem should entail.