On 6 July 2016, Sir John Chilcot published the findings of the Iraq Inquiry: a 2.6 million word document constructed over seven years of painstaking investigation into the Blairite government's actions leading to the war with Iraq. This heavily anticipated endeavour was vastly overshadowed by post-Brexit disarray and, whilst the report confirmed Blair's calculated dismissal of expert consultation, it impotently failed to trigger judicial procedure despite clear evidence of deceptive conduct leading to the deaths of an estimated 405,000 people.[1] While western media outlets debate the possibility of Blair's loss of credibility, he continues to live a life relatively unscathed, maintaining a schedule of public appearances and a net worth of £60 million, while Iraq continues to spiral into further catastrophe.[2] 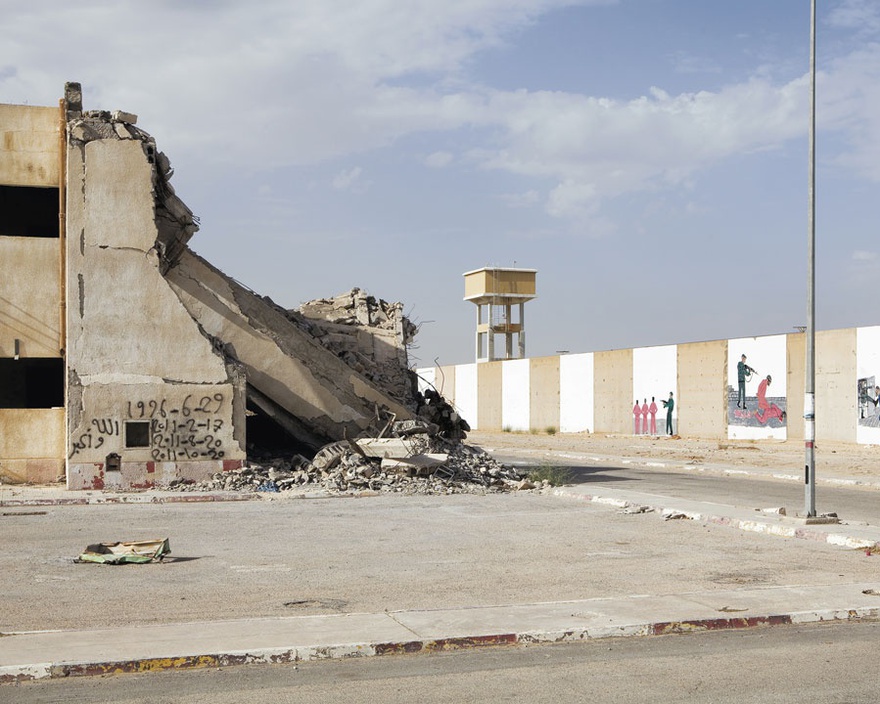 It is within this context that Edmund Clark's first UK solo show War of Terror, opened at the government-funded Imperial War Museum in London. The exhibition is an immaculately researched deconstruction of the hidden sites of incarceration and control in the so-called War on Terror, examining the spaces of terror that the conflict in and beyond Iraq has perpetuated. Stating the museum's intention to raise questions – not answers – on secrecy, accountability, legality and ethics, Director General Diane Lees opened the exhibition on 27 July expressing 'hope this exhibition highlights England's particular involvement [in the War on Terror] and the consequences thereof': a hope that raises tentatively provocative challenges to the current political climate.

Presented in five gallery spaces, the exhibition combines six major works, blending four audiovisual installations, deconstructed pages of Clark's latest book Negative Publicity (2016), letters in vitrines sent to Guantanamo detainee Omar Deghayes, and photographic works displayed in frames and large-scale wall vinyls. These works trace the experiences of detained individuals by utilizing materials from diagrams of water boards created by detainees, to extensively redacted CIA and British government documents. In the photographic series Guantanamo: If the Light Goes Out (2010), for example, hauntingly topographic photographs of shackles and a force-feeding chair in the Guantanamo Bay detention camp hang beside heavily redacted CIA documents from the series Negative Publicity (2016), which trace the domestic and bureaucratic spaces used in the processes of what is termed 'extraordinary renditions'. (Legally defined as 'the transfer of a person suspected of being a terrorist or supporter of a group to a foreign nation for imprisonment and interrogation on behalf of the transferring nation',[3] and frequently used in conjunction with kidnapping, secret imprisonment and torture.[4] 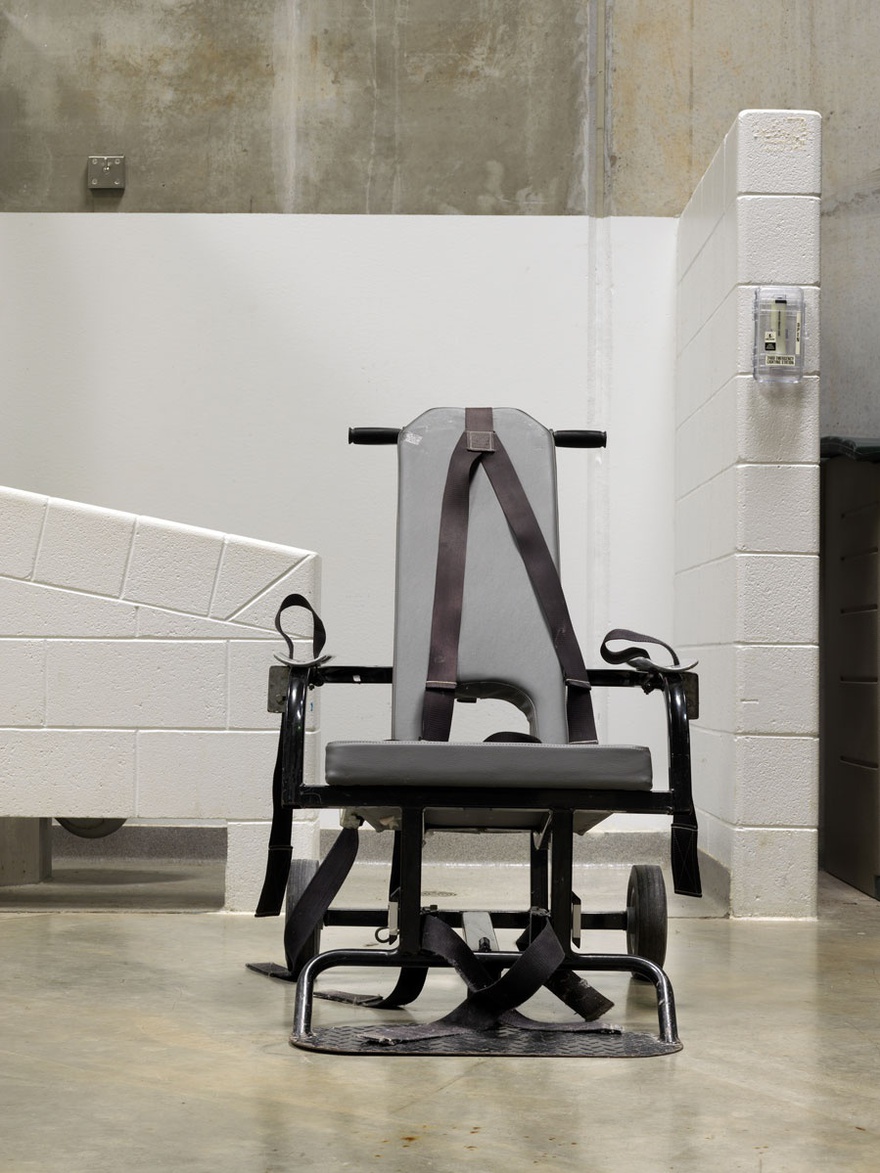 To produce Negative Publicity, Clark collaborated with legal investigator Crofton Black to trace such 'extraordinary renditions' carried out by the CIA. Images and documents in this series originate from airports, American residences and former CIA black-sites across Europe, the Middle East and North Africa. The resulting book Clark created from this study was awarded the Arles Photo Text Book Award. It uniquely translates evidence of human rights abuses into a document that has been adapted into an installation for this exhibition, in which pages of the book are displayed alongside an audio-visual projection detailing visually striking imagery and audio recordings from the investigation. These include photographs of the cul-de-sac that is home to a complicit American airline pilot; a swimming pool in Spain used by renditions staff during stop-overs; and the Abu Salim prison in Libya, formerly used as a CIA black-site. Bridging a space between legal documentation, historical trace and the gallery, the scale of investigation and struggle to aesthetize the banality within the documents directs the viewer's gaze back to the human experiences of individuals lost in dizzying bureaucratic traces.

Indeed, at the foundation of each artwork in War of Terror are the lives of men – each of Middle Eastern, North African or Pakistani descent – that have suffered personally as a consequence of extreme and secretive measures. These men have been held illegally, some tortured, transported between countries, kept from their families and abused in an invisible network of power and control presided over by a conflict in which terror is deeply reflexive. In Control Order House (2012), for instance, Clark takes a residence in London employed by the British government to detain and monitor a man held without charge, and uses architectural diagrams of the house's floor plan to map the domestic space onto the floor of the gallery as an installation. The map is situated beneath a light box displaying a photograph of closed curtains, hung beside a silent looped film diptych; one of the anonymous detainee's torso, following his breaths while lounging on a shabby sofa, and the other watching detainee's cat eating – the only legally identifiable life in the house. Methodologically topographic photographs detailing the vapid architecture of the house interior fill the walls of the adjoining room. 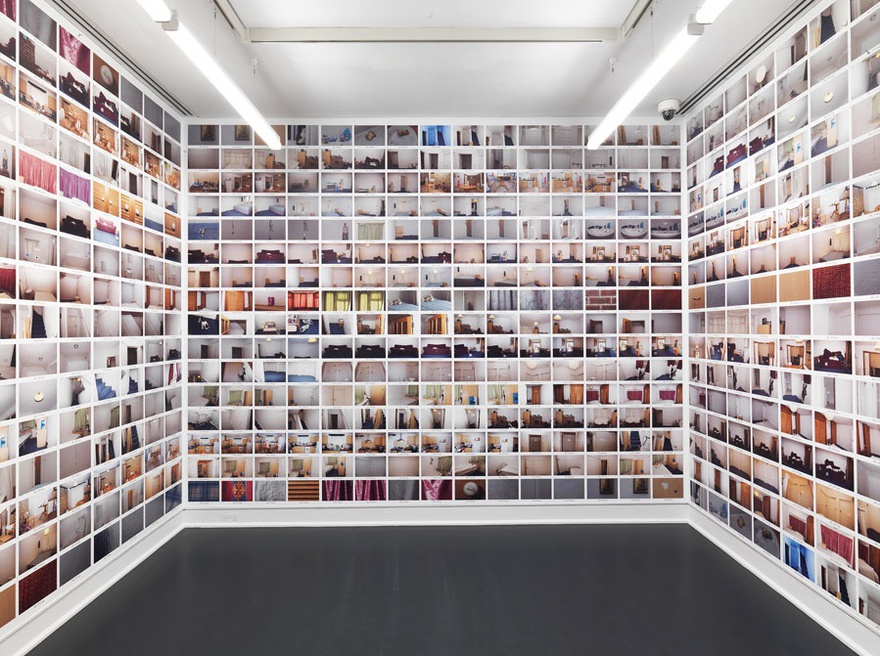 That the exhibition relies on the testimony of men who were never formally charged makes it impossible to view Clark's extensive research without being made intimately aware of the lives torn apart with calculated and manipulative precision. In Letters to Omar (2010), for instance, correspondence sent from individuals across the globe to Libyan Guantanamo detainee Omar Deghayes are displayed in vitrines. These letters fed into the creation of Section 4 Part 20: One Day on a Saturday (2010), for which Clark collaborated with Anna Stevens to construct a projected installation overlaying details from Letters to Omar with audio accounts of detainees' personal experiences of the prison camp that have been blended with readings of Wikileaked interrogation directives distributed to Guantanamo personnel. On the latter audio, Arendt's 'banality of evil'[5] is emulated in coldly articulated prose: 'The purpose of the behavior management plan is to enhance and exploit the disorientation and disorganization felt by a newly arrived detainee in the interrogation process. It concentrates on isolating the detainee and fostering dependence of the detainee on his interrogator.'

Throughout the exhibition, Clark impressively demonstrates the agency of the artist as an individual capable of moving between political spaces, gaining both extraordinary access and a poignant forum for public exhibition, presumably through the ambiguous notion of creative subjectivity. In doing so, War of Terror instigates a conversation that Chilcot failed to interrogate: that is, the experience of individuals that suffered as a consequence of the war in Iraq. Clark painstakingly translated mundane, obscure and redacted documentation into visually rendered spaces so as to imagine realities that can neither be seen nor be objectively recorded. In so doing, he reorientates the public gaze towards a debate that examines the individual experiences of those incarcerated, utilizing banality and bureaucracy to shape an alternate view that attempts to incorporate the perspectives of the unseen. That the exhibition takes place in the Imperial War Museum adds weight to Clark's questioning of the narratives and histories that define the War on Terror, enabling a necessary exploration of how the invisible experiences of those who have witnessed contemporary warfare might offer an alternate space for debate and critique. 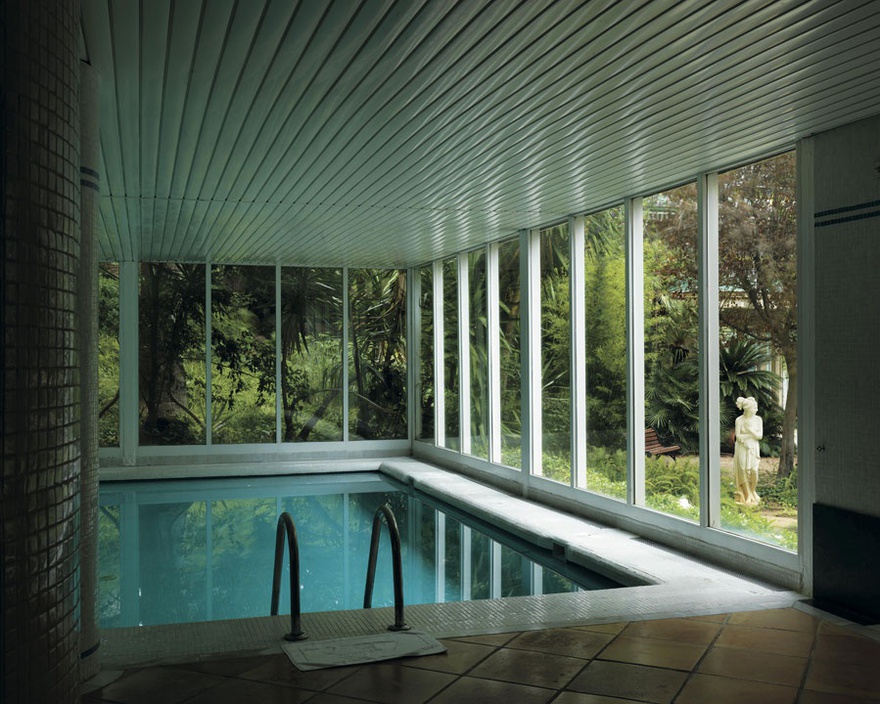 Edmund Clark, Swimming pool inside a hotel in Spain which was used by a rendition team, from the series Negative Publicity: Artefacts of Extraordinary Rendition.
Copyright Edmund Clark, courtesy of Flowers Gallery, London and New York.

War of Terror will run for 13 months, during which time its content will be factually updated where necessary as the year unfolds – a tragic and jarring inevitability when considering the developments that have occurred in the region in and around Iraq since the invasion in 2003. Space for unfolding events to feature has been specifically created in a transient new work commissioned by the museum and positioned at the entrance to the exhibition: Orange Screen (2016). This work consists of a slideshow of texts describing monumental photographs in the 'War on Terror' so as to draw attention to the use of imagery in shaping our perceptions of conflict, including descriptions of images of the invasion of Iraq, prisoners in Abu Ghraib, and terror attacks in Europe. The first slide reads: '2001 Black smoke from a tall tower seen across roads and skyscrapers its twin to the left intact and a plane lightly tilted black silhouetted against the blue sky.' No leap of imagination is required here to consider the slides that will follow as the work is updated in the coming months.

War of Terror is on show at the Imperial War Museum, London, until 28 August 2017.

[1] A. Hagopian, et al., 'Mortality in Iraq Associated with the 2003–2011 War and Occupation: Findings from a National Cluster Sample Survey by the University Collaborative Iraq Mortality Study,' PLoS Medicine 10 (2013).

[5] Hannah Arendt, Eichmann in Jerusalem: A Report on the Banality of Evil (New York: Viking Press, 1963).

Joy Stacey is a researcher, artist and curator based in Brighton, UK. She is currently developing her practice-based PhD at the University of Sussex titled 'Staging Palestinian Identities: Occupied performances of female gender and the dresses of resistance'.

The Taste of Displacement