Tinkerings on the Instable Present Tense

The Arab world is going through a transitional period that has been dubbed as the 'Arab Spring 'by some, and the 'Arab Fall' by others, both arguably outdated terminologies. Nevertheless, they remain significant idioms of the time, where individuals and societies are trying to make sense of an unsettling present tense.

As questions of this transition and its subsequent labels and representations arise, citizens are revolting, régimes are crumbling, and the relationships between religion and the state are being redefined by countless bodies on the ground. It is on that ground that artists and intellectuals in the region are reassessing their roles, repositioning themselves from being passive observers to active members of a participatory society. 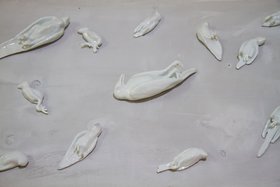 Given that the 'Home Works' forum, in its previous iterations, employed the medium of contemporary art in Lebanon and the Arab world to tackle genuine cultural and societal issues, the stakes were high for its sixth round (14th to 26th of May 2013), especially since the last forum ended in 2010, before the Bou Azizi times.

Home Works 6, in all its constituent parts, was consequently plunged into the harsh tide of this transitional moment. The legitimacy of the Lebanese Association for Plastic Arts, Ashkal Alwan, the relevance of the participating artists, lecturers and curators, the vitality of the attending audience, and the fertility of the ground of the host city Beirut, were all put to an unsympathetic but very crucial test.

In its 6th edition, the forum claims, 'tinkerings heard on side-streets, rooftops, hallways, and in stadiums, living rooms, classrooms and storage spaces' are its main sources of inspiration. With the volatile status of the region at hand, the forum's curator, Christine Tohme, decided to broaden the scope of discussion by inviting curators from Egypt, Palestine and Turkey to co-programme different segments of Home Works 6. This included, in addition to mature local and international artists, a group of young artists to be part of it. By doing so, Home Works 6 opened itself up to new geographies, languages and dimensions, buttressing the two main headlines of the forum, Tinkerings and The Trial. 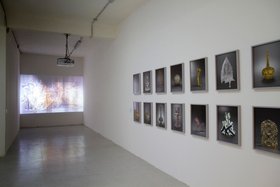 At first glance, one can notice direct referencing of contemporary political events in the region in a few of the forum's offerings. For example, this was evidenced in the published pamphlet by the Lebanese thinker Waddah Sharara, The Islam of Sacred Law & The Islam of State, which retraces the history of the relationship of Islam with the Ottoman Empire; a video interview with Syrian writer Samar Yazbeck about her impressions on the Syrian revolution conducted by Rania Stephan; a theatre performance titled Intimacy by Omar Abou Saada and Mohamad Al Attar about the struggles of a Sudanese actor between Khartoum and Damascus; a lecture performance, One Hundred Thousand Solitudes by Tony Chakarand the book release of The Dialogue That is Us predicting forthcoming Messianic time, which utilized collected  a visual survey of the recent Arab Uprisings, as shared on social media.

The remaining curated material, encompassing over a hundred pit stops at exhibition spaces, theatre performances, lectures, film and video screenings and roundtable discussions, was spread out into different locations of Beirut. These seemed more actively distant from the audience and the present.

As opposed to directly reacting to what is going on in the region, the forum's programme borrowed from historic events in the region and beyond to create a panoramic and thematic reading of history that would enable the audience to discuss the present. The theme of The Trial was not tackled through Mubarak, Gaddafi, Bin Ali, Saleh or even Saddam Hussein. Rather, it developed vis-à-vis similar regional and international examples leaving the audience to formulate their own apparatus to observe and discuss the subject in context.  This was echoed in one of the screenings, The Last Days of the Ceaușescus, a film that reenacts the former Romanian dictator and his wife's trial in 1989. Likewise, The Act of Killing, directed by Joshua Oppenheimer, was also screened, a film portraying the brutality of Indonesian gangs that were appointed security-keepers after the military coup in 1965. In parallel to these events was a lecture series, which included talks by Catarina Simão, Kader Attia, Paola Yacoub and Huda Barakat in addition to Love Letters to a Union, a lecture-performance by Lara Khaldi and Yazan Khalili, staging a romance-by-correspondence in the light of the failure of the union between Egypt and Syria.

The invitation of Palestinian guest curators suggested that there was an explicit political decision to include Palestine in this round's happenings, as the Palestinian condition seems to have recently been overshadowed in popular media by the obsessive notion of the 'Arab Spring'. Home Works 6 included screenings of films produced since the 1970s to the present day by international artists in support of the Palestinian cause such as Pacific Newsreel (USA) and Groupe Cinema Vincennes (France), in addition to Infiltrators a film by Khaled Jarrar about the contemporary adventures of people sneaking through the apartheid wall, and Mahdi Fleifel's A World Not Ours, a portrait of three generations of Palestinian refugees in Ein el Helwe camp in Lebanon. 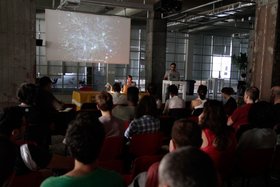 Plastic Veins, a group of events organised by Turkish guest curator Zeynep Öz, gave an overview of the institutional transition of cultural production from Ottoman times to present day Turkey, offering an example by which the future of the mechanisms of local and regional cultural productions could be read.

Our Lines Are Now Open: A Radio Series, organized by 98weeks in partnership with Lawrence Abu Hamdan and Nora Razian was a project that discussed the 'erotics, poetics and politics of reading'. The set-up allowed the audience to participate live in the discussion. One of the most interesting literary genres tackled during the broadcast was science fiction in Arabic literature, backed-up by a guided tour titled After the Future: Heritage Redux by Ghalya Saadawi in what is known as 'Solidere', the Beirut downtown district that was privately acquired and rebuilt after the Lebanese Civil War.

Egyptian curator, Tarek Abou el Fetouh's curated the forum's main exhibition, which was structured around three historic 'moments' that took place in intermediary periods in history: the first Arab Art Biennale in Baghdad in 1974, the first Alexandria Biennale in 1955, and the China/Avant-Garde exhibition staged in Beijing in 1989. By re-enacting key junction points in the history of cultural production, Abou el Fetouh's exhibition showcases the decisive role of art in dealing with time and space, posing the reoccurring question of the responsibility of artists and intellectuals of the region in actively participating in discussing and constructing their contexts. 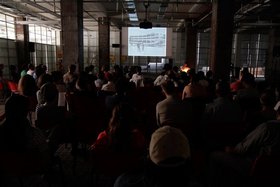 Through this mix of conversations about the past and the present, both in works delving directly into the issues and themes in question or indirectly through historic examples revolving around similar subjects, Home Works 6 was able to create a framework for a conversation about relevant contextual topics without falling into the trap of presenting brittle reactionary works and over-the-counter idea production. But what was observably missing in this Home Works was the intense discussions, especially after the lectures; something previous iterations of the forum were known for.

In addition to that, there were no clear discussions on the active role of artists and intellectuals in the definition of the future of the region and its identity within the scope of the transitional time in question. This could probably be linked to the historic scope of most of the curated works and the lack of seminars and roundtables dedicated to liaise these works with the present. The lack of focused debate could also be a reflection of the possible anxiety, fear and hesitation of the participants, be it the artists or attendees, in aggressively countering the posed and instable present tense.

Born in 1983 in North Lebanon, Roy Dib received his degree in Theatre Studies from the Institute of Fine Arts at the Lebanese University. He co-founded the theatre group 'Zoukak' with which he collaborated from 2006 till 2009, while also working in 'Metropolis (Art house) Cinema' until 2011. His work focuses on the subjective constructions of space. His most recent video works, Under a Rainbow and Objects in mirror are closer than they appear utilize scripted and archived footage to represent notions of the evasive self versus real place. He is currently based in Beirut, working on his new short film and writing for the cultural section of Al-Akhbar newspaper

The Life and Times of Louis Saboungi

When Buildings Become Part of the Record

Going Around in Circles

Looking for Palestine in the Jordanian Music Scene