Rana Hamadeh at The Showroom, London 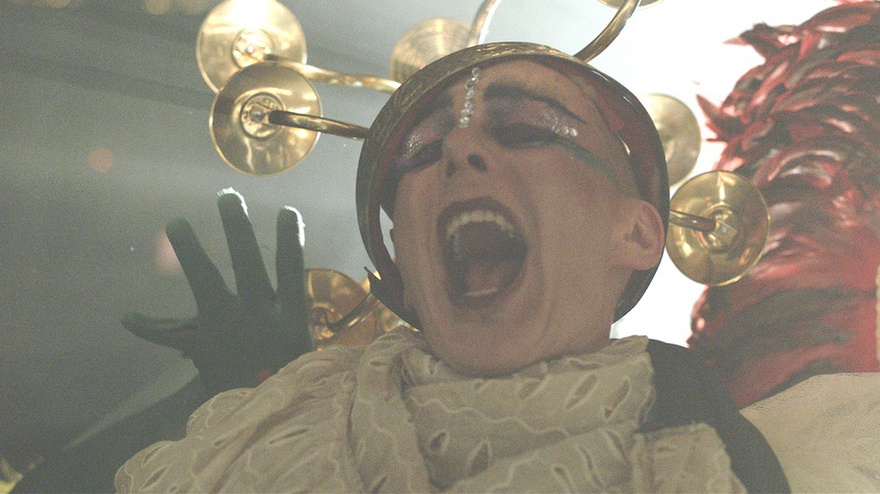 The Sleepwalkers is a new half-hour film by Rana Hamadeh, co-commissioned by The Showroom, London, Nottingham Contemporary, and the Institute of Modern Art Brisbane. It recently premiered at The Showroom, where it formed the centrepiece to an exhibition that also comprised of an architectural maquette of the film's stage-set; a glossary of terms used throughout the film, terminologies detailed in length and individually-framed; and a series of archival photographs and printed matter. The film itself is a dramatization of the true story of Raya and Sakina; two sisters who, in Alexandria in 1921, were found guilty of the murders of seventeen women, mostly prostitutes. The sisters were the first women to be executed by a legal court in the history of modern Egypt.

The story of the serial killer sisters is infamous, both as a case of Egyptian legal history, and for lovers of the macabre. Victims were found smothered with chloroform and their throats slit. Any jewellery and valuable effects were taken. The motive, seemingly, was theft. In common terms, the case of Raya and Sakina was an open-and-shut case. However, despite the sisters being found guilty of seventeen murders, there were reports of up to forty-two disappeared women in the same area during the same period of their killing spree. The story itself does lend itself to tabloid sensationalism. Various international reports, including those from The Auckland Star (April 30, 1921), and The Daily Mail (London, November 22, 1920), described the sisters' atrocities in varying (and probably debateable) detail. Hamadeh's script was based on a contemporaneous investigative report of the story by George Owen Hastings, and which appeared in The Washington Post on 16 January, 1921.

Hasting's report is exemplary in terms of how the story was presented to a foreign public, with Alexandria being described as 'a modernized and a hybrid sort of a place in the eyes of the average tourist,' and Sekina Aly Hammam being referred to a 'the Woman Bluebeard whose revelations have caused civilized Egypt and all Europe...to experience a ghastly horror.' Echoing the attitudes at the time, Hastings wrote: 'Even Paris, jaded and calloused to post-war excesses, is fairly speechless with amazement at the cold-blooded atrocities to which this avaricious Egyptian woman has with indifference admitted authorship.' Indeed, he noted: 'That a woman should have been the directing brain in such an uninterrupted campaign of butchery and wholesale theft makes it all the more abhorrent to the minds of Europeans and Americans, who will also be appalled by the fact that all of the victims nearly four score were women.' But Hastings was quick to point out that, apparently, these hard facts meant 'nothing to the native of Egypt...a land where the inferiority of the gentler sex is essentially a part of the national religion. Innumerable passages in the Koran testify to the idea maintained by the founder of the Moslem faith of the ineradicable iniquity of womankind.' Hastings even quoted the prophet, who observed that most of hell's inhabitants were women.[1] 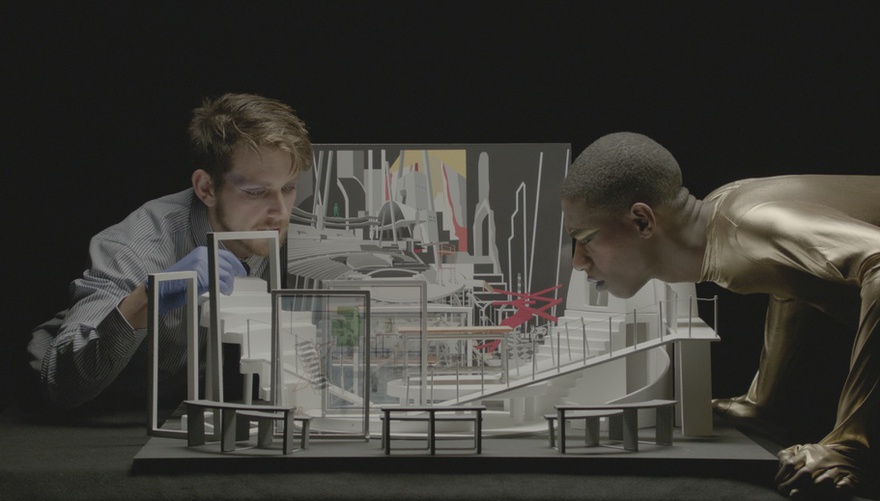 Hastings' report brought up another bizarre titbit. Upon their initial arrest, the sisters admitted to nothing other than knowledge of the address where some of the bodies were found. The chief investigator had, secretly, uncovered a garment belonging to one of the murdered women in the house where Raya lived. He then called a man into her cell, purported to be a magician with the gift of clairvoyancy, whereupon this man "broke into a whirling dance after the manner of a dervish."[2] Following an energetic, supernaturally inspired collapse, the dervish produced the found garment, to Raya's complete shock. Apparently, this discovery was enough to secure a confession from the superstitious sister.

The 'whirling trickster' is a key character within Hamadeh's film, and it is within this factually uncertain territory that The Sleepwalkers operates. The film, necessarily, is not straightforward. It is the dramatized documentation of a play that was performed on a specially constructed set at Nottingham Contemporary (the set is reproduced within this exhibition as the aforementioned maquette). As such, the actors play to both the live audience and us, the viewers of the film. In addition, the play's live audience become characters within the film-of-the-play; also, the (stage) actors provide the film's narrative voiceover – a very interesting tactic that begs the question of who comes first? The narrator or the actor? In fact, who are we listening to when the voiceover spits whispered epithets: "Prostitutes!.... Fucking prostitutes!"? 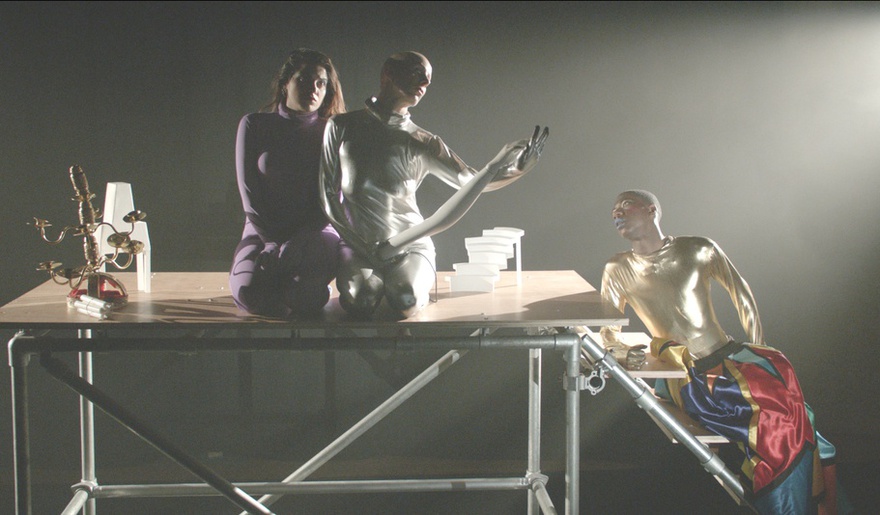 This metatextual layering of device is mirrored within the storytelling. Hamadeh switches between narrative tropes, giving characters voice through theatrical styles that include going from the medieval mystery, the morality play, the farce, the masque, to more recent postmodernist styles that question the errancy of given fact, including Brechtian theatre, Theatre of the Absurd, and Beckettian styles. The film is frenetic; structurally fractious, it looks (and feels) like it was edited with a razor blade – slashed at indiscriminately with the shards rearraged as a chance operated collage. The soundtrack is a throbbing pulse, an initially calm and paceful metronome that crescendos exponentially. Stylistically, the works resembles Tom Tykwer's Run Lola Run (1998) (a film described as "Pippi Longstocking [for] the ecstasy generation"[3]) than Verbatim Theatre, a relatively recent style of documentary theatre that uses the stage as a space for investigation into incomplete legal matters.[4] Often in Verbatim Theatre, the playwright is merely a conduit between recorded legal transcripts and the audience, it is the production process that puts strain onto the dour or dry words. There is no doubt that The Sleepwalkers is an authored work.

The presentation of the film in The Showroom exhibition in London was the latest iteration of Hamadeh's ongoing project Alien Encounters (2011–).[5] The project is an intricate re-reading of a wide range of historical reportage and cultural document that intends to open up a space in which to interrogate the concept of 'alienness', Hamadeh has explained, 'where the alien as seen as both an outcast to the law and as an extraterrestrial.' For the artist, the research behind this project is 'particularly informed by this conjunction between the legal and the spatial.'[6] Alien Encounters has been displayed in a diverse range of manifestations: as artworks, texts, publications, conversations (both public and private), performances, and re-enactments. In the case of The Sleepwalkers, the diversity Hamadeh has explored through Alien Encounters is both necessary as an artistic trope and as a distraction. In the physical display of The Sleepwalkers at The Showroom, for instance, the assortment of material on show makes it evident that a great deal of care and attention has gone into the research and creation of this chapter of the overall project. Yet, the ephemeron does very little – in practical terms – to extend upon the excellent examination that the film undertakes of its topic.

To say that Hamadeh demonstrates a deft touch in balancing between the wide range of styles and voices within the film would be too easy; the viewer is put in a position of privilege throughout and we are never left chasing the narrative. Similarly, its technical aspects are handled with a high-level of professional delicacy rarely seen in artists' moving image. In this writer's subjective opinion, the film is a great success as a documentary: one in which historical records are presented with their subjectivitity intact, and the same liberty is given to the potential of the supernatural, but not only. The Sleepwalkers is an uncommon work: well-detailed, well contextualised, thoroughly researched, and provocative. Its composition is takes advantage of an apparent – and human – inability to define accurate territories that are stable enough to make true projections. What we are shown, instead, is how the projections that we make almost always occur within that unstable space between what we know, and what we choose to believe.

Rana Hamadeh: The Sleepwalkers was on display at The Showroom, London, from 27 January to 19 March, 2016.

[1] The full article, and others, can be found at The Unknown History of Misandry, 08 February 2015 [online: http://unknownmisandry.blogspot.de/2011/09/raya-sakina-ablel-al-egyptian-serial.html]

[4] London's Tricycle Theatre are a leading proponent of Verbatim Theatre, from works including Bloody Sunday (Norton-Taylor, R., 2005), and the Afghan War series The Great Game (2009).

[5] For a detailed analysis of previous chapter of Alien Encounters, as well as a description of the umbrella project see "Alien Encounters: Rana Hamadeh in conversation with Stephanie Bailey," Ibraaz Platform 006, 06 November 2013, [online:http://www.ibraaz.org/interviews/105]