Describing herself as a compulsive reader it is no surprise that Koyo Kouoh – founding artistic director of RAW Material Company Dakar – has decided to embed her proposal for EVA International 2016 in language, poetry and storytelling, as illustrated by Liam Gillick's convivial open-mic performances And then… (2016) held in a pub. Kouoh's long-lasting fascination with Irish literature was a good omen for her nomination as curator of this biennial's 37th edition, which takes place in Limerick City Gallery (LCG), the post-industrial Cleeve's Condensed Milk Factory, the Hunt Museum (former Custom House), King John's Castle (token of the Norman's power) and a Sailor's Home (that never was). Started as a cultural festival in 1977, EVA is both firmly rooted in its environment and committed to including seminal international curators, among which Salah M. Hassan (2001) or Bassam El Baroni (2014). Enfeebled by socioeconomic crisis and a bailout atmosphere in past decades, Limerick is now making great efforts to carry off the laurels as European Capital of Culture 2020. In this context, EVA is marketed as 'Ireland's biennial', and this edition's quality can only prove it.

Drawing on Constantine P. Cavafy's poem 'Waiting for the Barbarians' (1904), who also inspired J. M. Coetzee's eponymous novel (1980), Koyo Kouoh has titled her biennale Still (the) Barbarians and stitched reflexions around the eternal resort to outsiders/enemies/the other at the time to define the agency of a self/state, and so on. Taking a decolonial framework and Ireland as points of departure, 48 artists from 23 countries explore both the way coloniality has been digested and its complex (un)conscious impacts on collective memory, history reading/writing, psychology, landscape and urban planning or migration. Entering the pristine LCG, the monumental wall installation Thousands are Sailing (2016) by Mary Evans, inspired by The Pogues' song, is a stern reminder of the diasporic phenomenon and its effects on societies through 'loss, absence and transformation'. Scattered Kraft paper-cut silhouettes await to embark on boats; an allusion to both the Middle Passage and to cyclical migration waves. This touching work resonates with the neighbouring sculpture, Destroy Your Home, Build Up a Boat, Save Life! (2015), by Hera Büyüktaşcıyan: a raft made of carpets rolled and maintained together with a red thread, which evokes exile, refuge, and the fragmentation of memory engendered by dispersion.

Kouoh also cites Achille Mbembe and his essay 'The Banality of Power and The Aesthetics of Vulgarity in the Postcolony' (1992) as inspirational. 'The structures and mechanisms engrained in society through history have a legacy we inherit according to what we are culturally subjected to', she says. To her, a global postcolonial typology stands out: one marked by 'systems of overcoming, dispossession, exploitation, and violence' inflicted by empires who sought to homogenize the world. 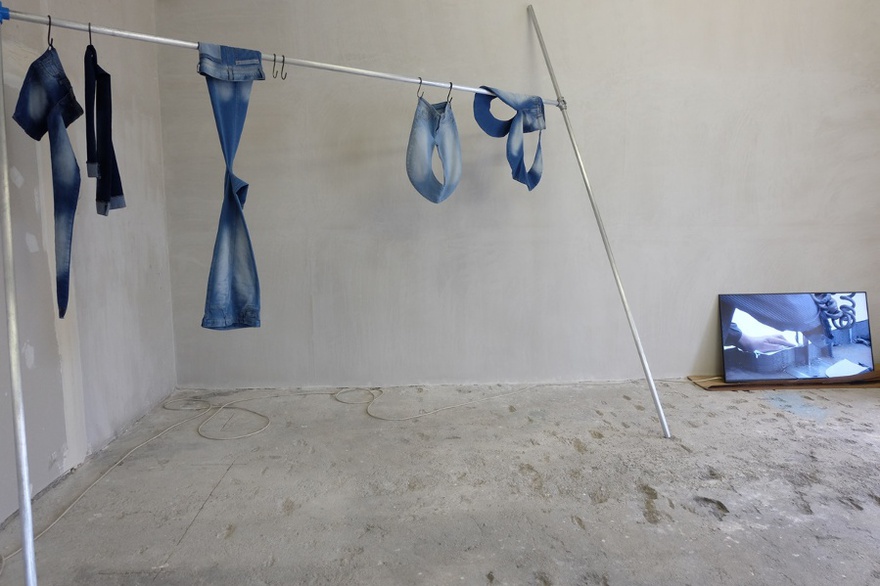 Indeed, the erasure and silencing of voices are common features suffered by colonized countries. Imposing a foreign language, or even defining a Latin taxonomy, have served as tools to assert western domination. Idioms conveying identity, oral histories, beliefs and cultural heritage, speaking one's language can be an act of resistance. In that perspective, Kouoh has been adamant to put Irish under the spotlight of the biennale. For the first time ever, the catalogue is bilingual: English and Irish – though no content was written directly in Gaelic. For Kouoh, 'if one loses his language, then he is not himself anymore' – a notion embodied in Alice Mahers' unsettling video, Cassandra's Necklace (2) (2016), in which a woman's neck is adorned with raw tongues.

Kouoh's proposal is remarkably timely considering the centenary of the Easter Rising in Ireland this year – Éirí Amach na Cásca – which, after its outburst in 1916, led to the Irish Independence War and eventually to the proclamation of the Irish Free State in 1922. The simple fact of counting this country as a colony is quite uncommon, as the Irish themselves took part in the British colonial enterprise. The curator argues that the processes of assimilation have been such, and that the geographical position of Ireland within Europe account for the reluctance to engage with postcolonial discussions here. As a matter of fact, out of the nine Irish artists invited to EVA, very few address the issue directly: Softday and Deirdre Power rewrite the national anthem in Nice Screams: A Citizens Anthem (2016) while John Waid's 909, 125 Minutes Later (2016) requests a delay of the sounding of the Angelus bell by 25 minutes and 21 seconds, recalling that Ireland used to have its own time zone until it joined Greenwich in 1916. Jonathan Cummings, in turn, delves into the psychological impacts of political activism on individuals and their families by following IRA militants from their imprisonment to their release, in three videos filmed over 12 years: When I Leave These Landings (2004–2009), Go Home (2010–2013), Out The Road (2012–2016).

Otobong Nkanga, The Weight of Scars, 2015.
Copyright the artist.

Imprints of power structures and conflicts on the landscape and architecture are another key theme in EVA. Digging into the land settlement or the transformation of cities is a lesson of history. The memory contained in the ground or buildings reveal parallel narratives. At the LCG, as a topographic survey, The Weight of Scars (2015), a wondrous four-panel textile tapestry by Otobong Nkanga, denounces the neglecting of former mined areas in Namibia and depicts a splintered territory. At Cleeve's, Jeremy Hutchison reflects on ravaged and contested lands by creating a fictitious history of Palestine as a prime indigo-producer country: Fabrications (2013–2016) presents jeans mirroring the experience of manufacturing goods in a factory that had a tank cannon pointed at it for six months. The influence of urban planning on how people move, and relate to their space, is equally crucial. The collective Public Studio filmed the segregated roads in the West Bank in what is titled Road Movie (2015): the film is projected onto several large-scale screens, rendering the experience of exclusion and confinement as an intimate one.

Pushing further, the dialectics between freedom and constraint are addressed in two other works. Drawing on Limerick's lace history, devoted to women often kept in asylums or convents, Godfried Donkor looks at incarceration and mental liberty through African and European relationships to lace. Together with resident lace-makers, he created Rebel Madonna Lace Collection (2016), a mix of Ashanti's symbols and local patterns – expanded from the textile to the walls, and exhibited along two mannequins wearing an industrial Ghanaian-made straitjacket and an orange prisoner suit. Rejecting conventional systems of meaning, Journal Rappé's inclusion in EVA is a must. Initiated by Xuman and Keyti, it is a witty, savvy, Senegalese rapped, rhyming, news bulletin in French and Wolof broadcast simultaneously on a local television and YouTube. Using the vernacular to touch its audience, Journal Rappé is a refreshing example of thinking society differently and freely.

Playfulness, although not obvious, underlines the show and can be found in the biennale's title too. It hints at the tricky posture towards barbarism: in the end, are we, or are they the Barbarians? Are we fighting against an internal, or an external threat? Does this menace materialize or is it plainly fear that manifests? Could this be an opportunity for more humanity? In this, Kouoh moves from decolonial discourses to really engage her audience in a more existentialist quest on togetherness and social cohesion. This brings to my mind the work of Hélène Cixous, who said, ' …if there were no other, one would invent it […] The paradox of otherness is that, of course, at no moment in History is it tolerated or possible as such. The other is there only to be reappropriated, recaptured and destroyed as other'. It is this paradox and these experiences of otherness that are underlined in Still (the) Barbarians.

Clelia Coussonnet is an independent curator, editor and writer. She is a regular contributor to Another Africa, Apollo, CCQ, Diptyk, Ocula and Ibraaz. She is co-developing the editorial project In/Visible Voices of Women, together with Missla Libsekal. Her areas of research include silenced voices, mapping and place, mysticisms, plant politics, memory and its fragmentation, orality, sound-based artworks, and rhythm.