'Too Early, Too Late: Middle East and Modernity' at the Pinacoteca Nazionale di Bologna

Since the New Museum in New York dressed its survey of art from the Arab world in Jean-Luc Godard's Here and Elsewhere (1976) last year, whisking together Brechtian cinema with contemporary art from the Arab world seems to be in vogue. Take an exhibition of similar scope that recently opened at Pinacoteca Nazionale di Bologna, Too Early Too Late, proclaimed 'the largest ever exhibition in Italy dedicated to the Middle Eastern art scene' – a 'previously peripheral and now central geographic area'. The exhibition takes its name from Jean-Marie Straub and Daniéle Huillet's Trop Tot, Trop Tard (France/Egypt, 1981).

Too Early Too Late is the second in a series of exhibitions produced in a joint venture between Bologna's yearly art fair and the Ministry of Culture. It follows Il Piedistallo Vuoto (The Empty Pedestal), staged at Bologna's Archeological Museum in 2014. These exhibitions have so far exclusively presented works owned by Italian collections pieced together by the same curator, Marco Scotini, and have both pointed their gaze towards a certain 'East'. The theme of last year's show, for example, was artistic production from Eastern Europe, while this year sieves through the so-called 'Middle East'. 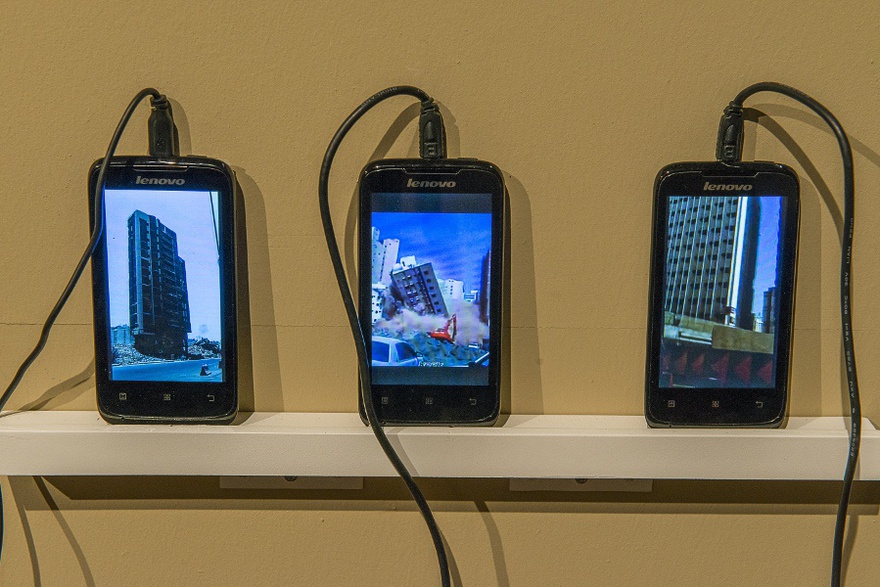 With over 100 works by 60 artists spread across the temporary galleries and extending into the fourteenth-century collections on the upper floor, this show is impressive in scale and scope. Its exceptional range of artistic positions from the United Arab Emirates, Egypt, Iran, Israel, Lebanon, Palestine, Saudi Arabia, Syria, Turkey, Uzbekistan and other countries includes important works by the likes of Kader Attia, Emily Jacir, Mona Marzouk, Ahmed Mater, Walid Raad, Hassan Sharif, Wael Shawky, Ahlam Shibli, Akram Zaatari, and many more. Less than a quarter of the participating artists are female, which is regrettable. On the upside, the show hinges not entirely on the usual themes of crisis, conflict and revolution but instead adopts a framework detailed with historical references, though one can argue such an approach is not unlike the marketing tactics of an art fair. 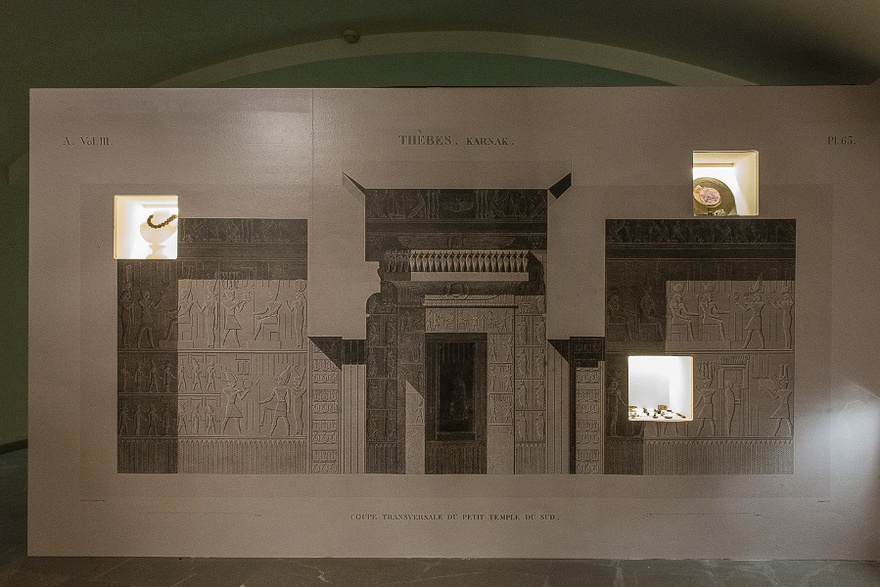 Symptomatic of the exhibition's inclusivity, we find its namesake also among the works on display. Straub-Huillet's film juxtaposes the predicament of French peasants prior to the 1789 Revolution and the Egyptian revolts ahead of Muhammad Naguib's revolution in 1952. Following the events in Egypt in 2011, the film's title would come up quite frequently during debates on the untimeliness of artistic practice vis-á-vis major political transformation.[1] From a Cairo perspective, posing that question now seems ironically delayed. But that was short-sighted of me to think, given Too Early Too Late paraphrases an anachronism of historical proportions that had already begun to unfold over two centuries ago when the ideological and historical narratives of western modernity hit the Islamic world. Such vast scope is an ambitious task for a contemporary art showcase. 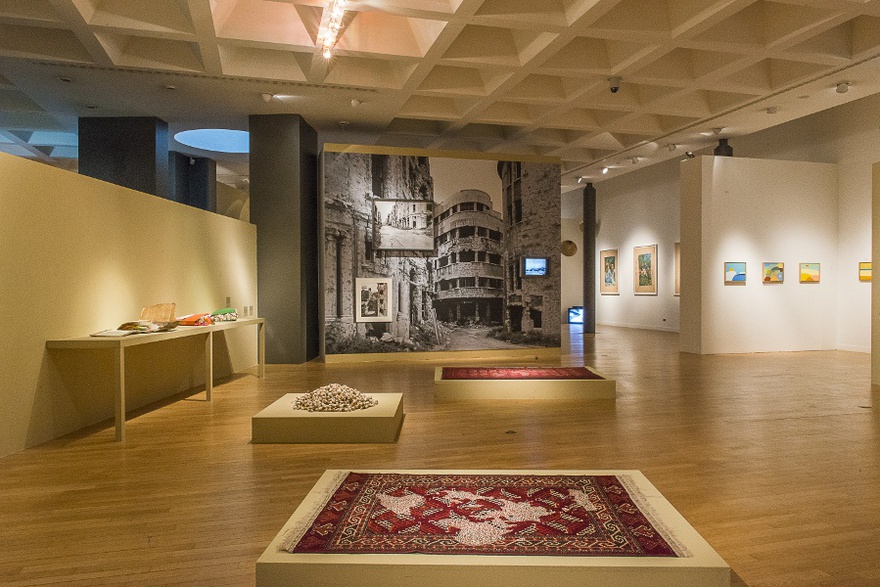 Starting with Edward Said's tenet that Bonaparte's invasion of Egypt marked the birth of Orientalism, Scotini maps this history with a number of key references, inserts, and chapter titles that organize the exhibition space. Coming down the stairs towards the basement entrance, a temporary wall awaits, with a cross section of the Karnak Temple in Egypt printed on its front and artefacts lodged inside it. The floorplan designates this as 'Description de L'Égypte' and the artefacts seem to be artworks by Mona Hatoum, Mustafa Abu Ali and Bisan Abu Eisheh: I say 'seem' because labels and descriptions are all in Italian and the desk offers no translations other than a bilingual exhibition catalog for 22€. The elegant, small book, with two essays, several shorter texts, and detailed information on each artist, helps me decode further inscriptions. It does not, however, alleviate my unease about other things to come. 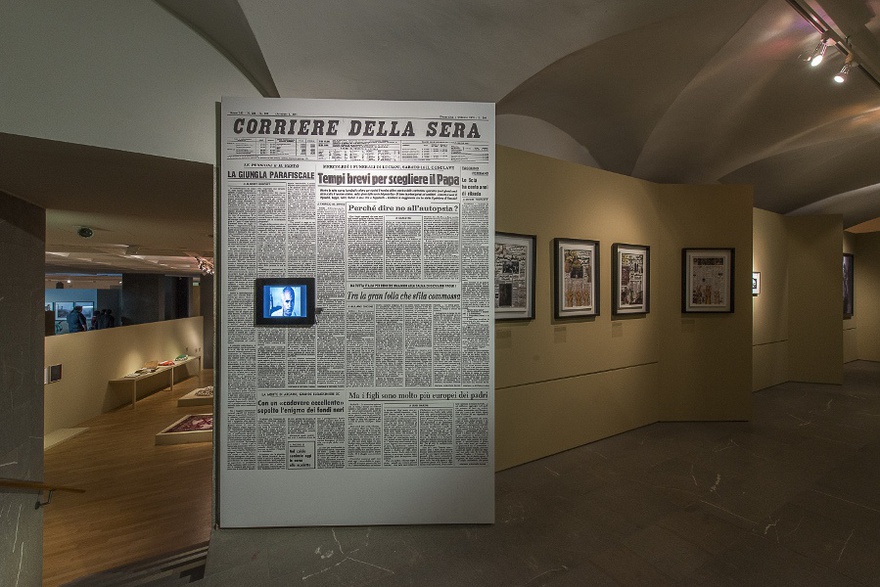 One of the most favourable aspects of this show is the way it contrasts the historical with narrative angles. Abbas Kiarostami's film First Case, Second Case (1979) set against Michel Foucault reporting on the Iranian Revolution in his column for the Corriere della Sera, for instance; Gabriele Basilico's celebrated photographs of a war-torn Beirut in 1991 framing A Journey (2006), Lamia Joreige's video about the fate of Palestinians in Lebanese society; or the re-readings of Pier Paolo Pasolini's 1965 documentary Sopralluoghi in Palestina per il Vangelo secondo Matteo (Location Hunting in Palestine) by Palestinian artist Ayreen Anastas, who repeats the journey in Pasolini Pa* Palestine (2005), and by Israeli artist Amir Yatziv whose This is Jerusalem Mr. Pasolini (2013) contrasts the filmmaker's voiceover from the documentary with the dramatic scenery of The Gospel of St. Matthew (1964), which Pasolini decided to shoot in Italy because people there looked less wretched by modernity. I found these and other traces useful in that they add a specific dimension to the reading of the works, unveiling how a European gaze framed the 'Middle East' over time with the stereotypes and idealizations modernity ingrained in western minds.

Still, it is tempting to reject this mise-en-scène as too eager. Theoretically, the Orientalist register remains contained but the interventions are too dominant, even overbearing, at times. It seems the organizers underestimated that the museum architecture would double up with the staged setting, which at best lends an archaeological feel to the site and at worst presents artworks like historical excavations or relics of an ethno-anthropological heritage. At moments like that, the project feels haunted by the very ghosts of modernity and its homogenizing historiography of a topos it wants to expose. 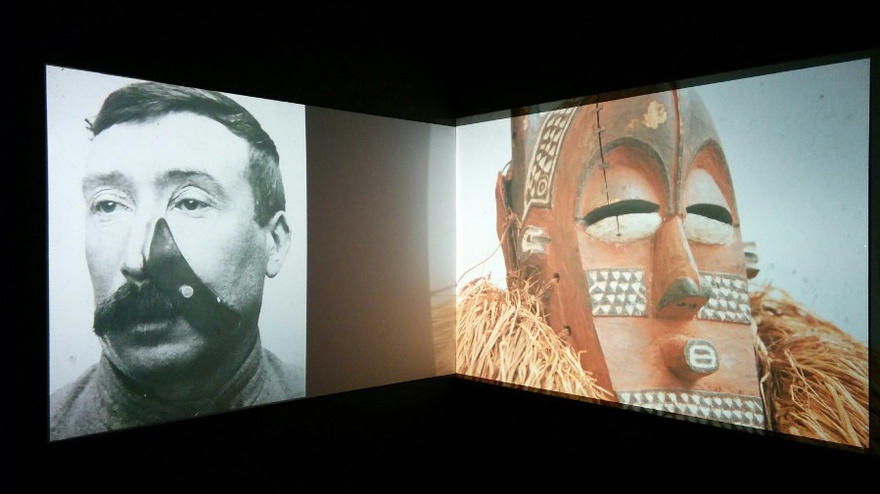 The exhibition catalogue is equally generous with frames of reference. One moment it primes the reader on how both modernity and the Middle East are concepts fabricated by the 'West', and the next moment it kindles a new Cold War between Islam and 'the West' to promote art from the 'Middle East' as if it were another eastern Europe. While there is no doubt this exhibition marks a striking survey of Italian collections with an eye on the 'Middle East', it might be worthwhile to study the individual acquisition dates. Collectors are often listed anonymously,, and knowing some of the participating artists, I wonder how their works ended up here and what actually came first: the show or the collector's bid. One of the forewords[2] grants maximum authority to private collectors and public collections, 'highlighting not only their vision but also their role as true cultural leaders' – in other words, endorsing a latent imperialism in art patronage and collecting. Hoping the print publication might tender a subtler theoretical underpinning, I examine Scotini's essay, 'The Negotiable Boundaries of Time'. His first chapter skates around the course of history and gets sidetracked in a semantic puddle of now-and-then, already-but-not-yet, and before-and-after analogies, all too inspired by the late D.W. Griffith's lament that modern film misses the moving wind in the trees. 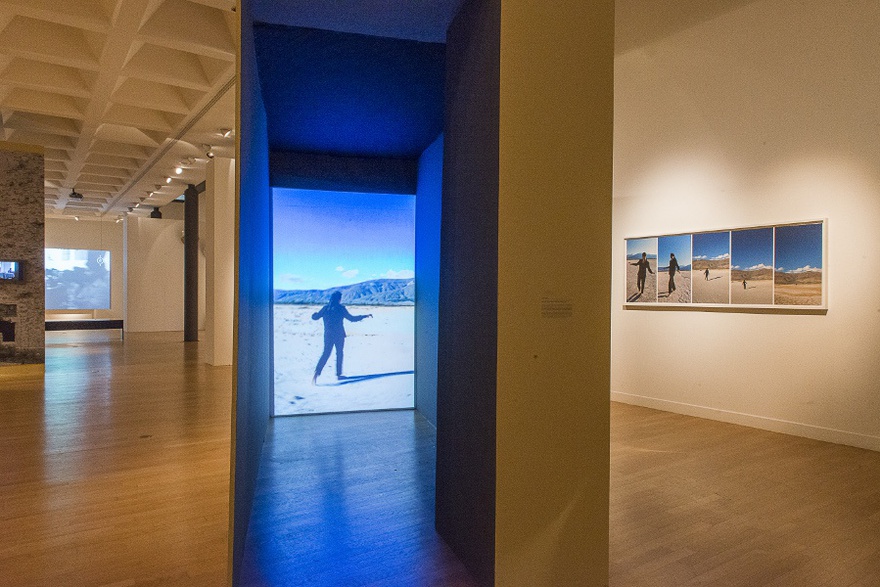 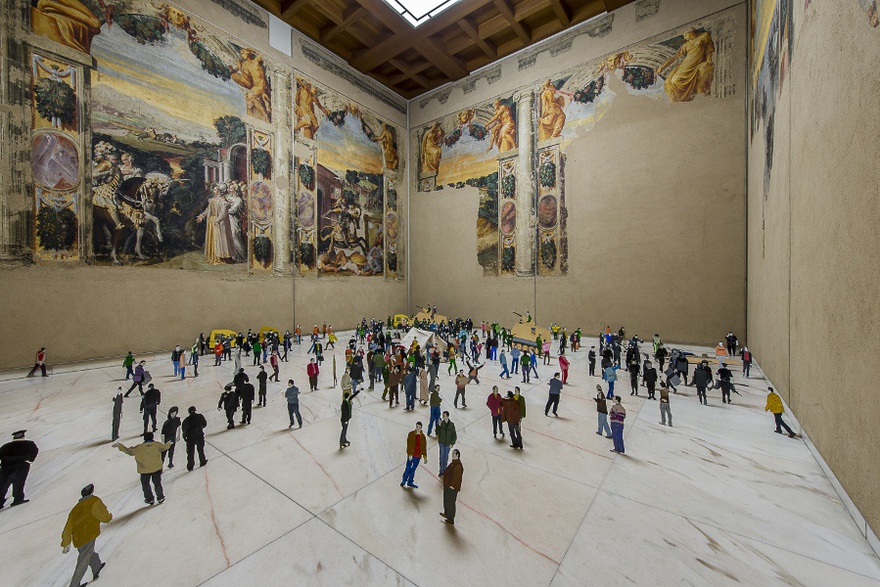 Wandering through the exhibition space, I happily stay within the boundaries of my own exteriority to what is displayed and what displays. More than the wind of history, I sense a breeze of the art fair blowing through the museum souterrain, which I don't mind since many works can weather the spell and nothing impedes the flow – except, perhaps, sporadic sound spill owing to a spatial arrangement I would rate as tight. During my visit, Akram Zaatari's 6-minute video Twenty Eight Nights: Endnote (2014) blares so loud across the basement that nobody can grasp a word from adjacent video works. Considering this a minor technical hiccup, I am truly disheartened to find Wael Shawky's Cabaret Crusades: The Horror Show File (2010) with no sound at all on the upper floor. When asked if he could up the volume, the museum guard shrugs his shoulders: there are no speakers installed because the now-mute marionettes speak Arabic throughout the film anyway. I should read the subtitles instead. 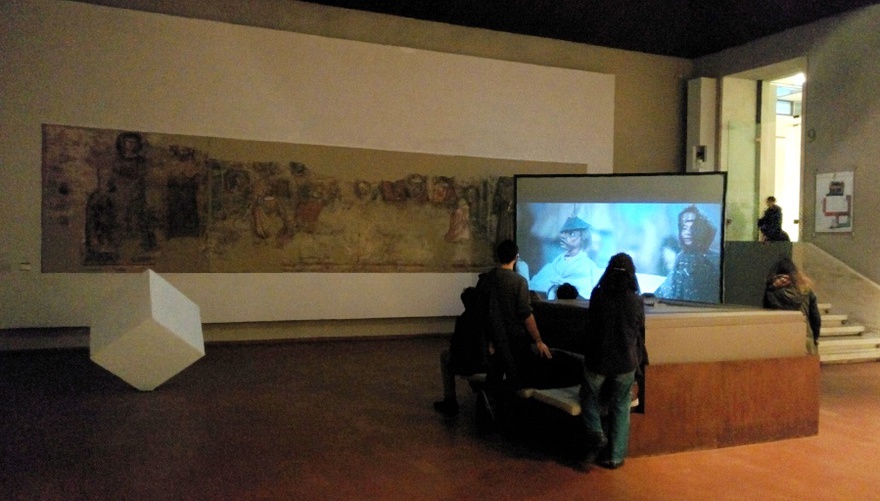 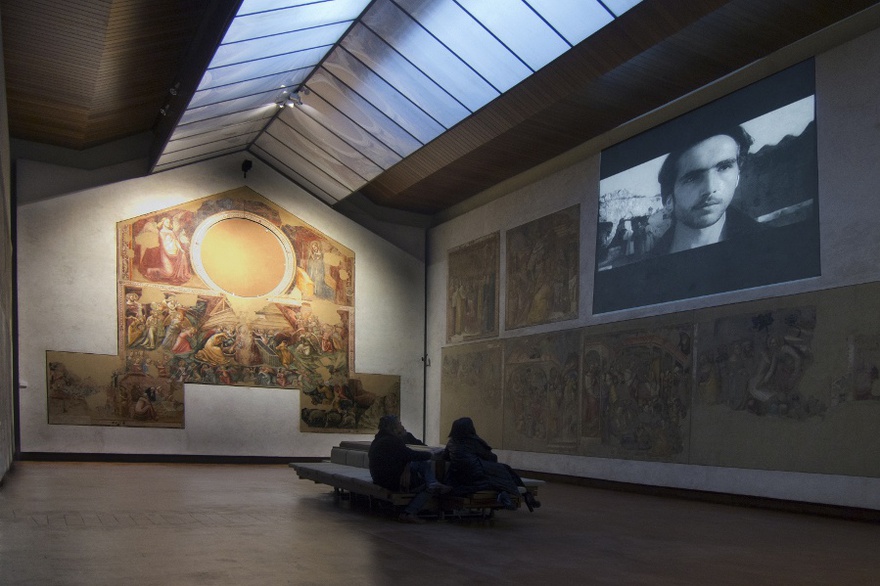 Too Early Too Late achieves something remarkable and unique but gives it away too easily. It could have learned more from Edward Said's Orientalism:

In fine, how can we treat the cultural, historical phenomenon of Orientalism as a kind of willed human work – not of mere unconditioned ratiocination – in all its historical complexity, detail and worth without at the same time losing sight of the alliance between cultural work, political tendencies, the state, and the specific realities of domination?

Considering its institutional resources and the outstanding collection of works combined, it seems a missed opportunity to not even begin to explore the triangular relationship between political events, their mediation, and the market value of art. Visitors keen to read between the lines may glimpse the irony here and there: when watching Kiarostami's film First Case, Second Case on a tiny monitor tucked inside a blown-up print of Michel Foucault's Persian Notebook, for instance. Even an intellectual mind of Foucault's rigor, well-versed in the vectors of power and domination and accredited by Said for his oeuvre, did not see the greater picture, while Kiarostami, at the time not yet the established filmmaker he is today, succeeded in exposing the intricacies of Iran's ongoing social and political transformation without being acknowledged for it for some time.

[1] Céline Condorelli conducted an interview with Straub in 2010, reprinted in the publication accompanying this show, and hosted a screening at Tate Modern in February 2011. The Cairo-based art initiative Beirut screened the film in Beirut in April 2012. For a sound theoretical position on the recurrent debates on timing, see art historian Angela Harutyunyan's essay in the catalogue of PhotoCairo5 (2012), published by the Contemporary Image Collective in Cairo (with two years delay) in 2014.

Jens Maier-Rothe writes, researches, teaches and makes exhibitions. From 2012–2015 he was founding co-director of the art initiative and exhibition space Beirut in Cairo together with Sarah Rifky. He lives and works in Berlin.