Ibraaz has produced an online catalogue for the exhibition, also available to download, which includes an introduction by curators Aaron Cezar and Cliff Lauson, essays by Dr. Alexandra MacGilp and Rayya Badran, individual projects pages for each participating artist, and a foreword by Ibraaz Editor-in-Chief Anthony Downey. This will be followed by an online catalogue produced for the group exhibition A Prologue to the Past and Present State of Things, which opens at Delfina Foundation on 2 July. 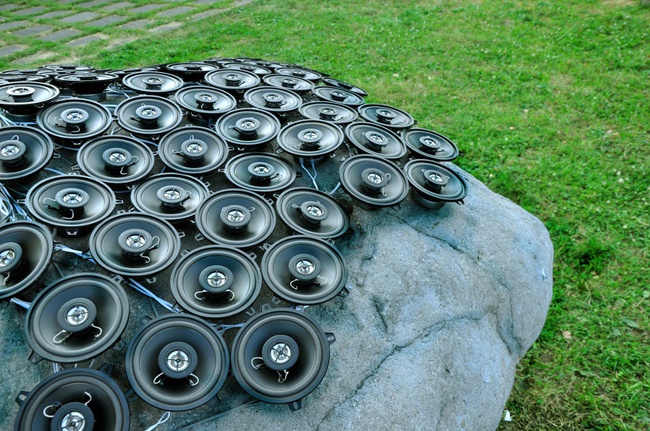 Echoes & Reverberations explores sound as a medium of culture and history through the work of six contemporary artists, largely based in the Arab region. Using a variety of media, the artists explore the performative nature of different sounds – such as field recordings, hymns and oral story-telling – as well as their ability to both conjure and challenge cultural memory.

Focusing on how history is performed through sound, alongside the performative act of listening and interacting with its ephemeral contexts, this exhibition evokes a contested sense of individual and collective histories. In each of the works presented here, from artists as diverse as Jumana Emil Abboud, Basma Alsharif, Samah Hijawi, Anas Al-Shaikh, Magdi Mostafa and Joe Namy, these multiple, often fugitive, means of recording history are also concerned with how the experience of sound, a gradual informal process of aggregation, becomes in turn historical.

Echoes & Reverberations is an exhibition that launches Staging Histories: Delfina Foundation's long-term project to document the history of performance art from and in relation to the Arab region through archival research and new commissions. Specifically, Echoes & Reverberations explores sound as a medium for performing history and listening as a performative act.

Indeed, in the contemporary 'Middle East' where several conflicts are ongoing and there are many dislocated people who have left their homelands, such as Syria, Palesine and Iraq, there is a sadness and nostalgia for the past, which can manifest musically and politically.

The proposition made by practices that attempt to go beyond 'empirical recording' of places is momentous insofar as it allows us to explore and think in ways in which sound as a practice can transcend the representational nature of visuality.

Anas Al-Shaikh's two-channel work My Land, 2 consists of a close-up video of Bahrain's red-and-white flag and another presenting the artist's naked torso with his back to the viewer. As the flag begins to fly and music starts to play, the artist beats time on his face with a series of rhythmic, sharp slaps.

Encompassing drawing, performance and sculpture, Jumana Emil Abboud's A Happy Ending part II: Two Skins draws on motifs, characters and objects found in Palestinian folk-tales. The objects and figures in both her olive wood carvings and her drawings are depicted in the midst of metamorphosis. Caught between two states, these creatures are 'neither plant nor stone, animal nor human, good nor evil.'

Samah Hijawi's Paradise Series forms part of the artist's ongoing research project – entitled Chicken Scribbles and the Dove that looks like a Frog – that looks at the relationship between aesthetics, art-making, trauma and loss in the Arab world.

Namy's installation for Echoes & Reverberations – a poetic deconstruction of the harmonium – reveals the process and references that influenced the score, not least the complex history and politics of the instrument.

We Began by Measuring Distance

We Began by Measuring Distance considers the relationship of an individual's memories and subjective experience to political history, and how image and sound can communicate the past. Through a combination of long still frames, text and sound, Basma Alsharif weaves together a loose narrative about an anonymous group who fill their time by measuring distance.

The panel on which Wisdom Tower's speakers are displayed recalls the mihrab – a semi-circular niche that indicates the direction of Mecca, which is set into the wall of every mosque. A central concern in Mostafa's work is the conceptual relationship between sound and architecture.