Photographs With A Flag: Mohammed Kazem 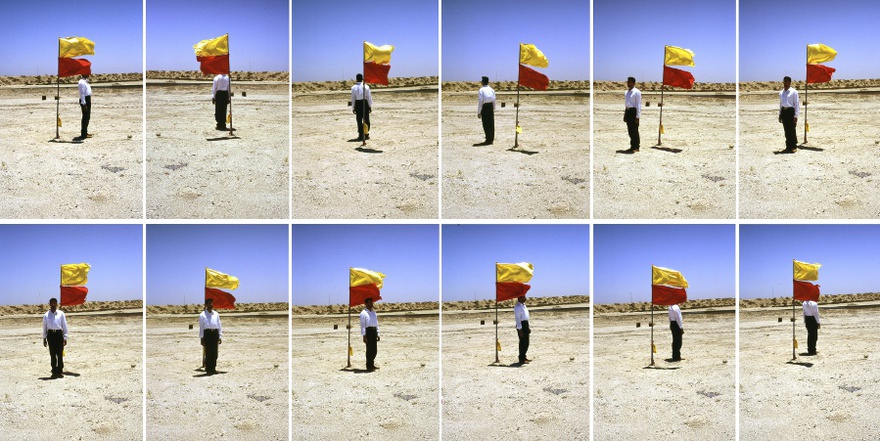 Photographs With A Flag

This work marks Kazem's transition from early autobiographical performance pieces to an interest in meticulously documenting his location within his surroundings, particularly when faced by the rapid changes that have taken place across the United Arab Emirates over the last 20 years. In this work, Kazem moves around the circumference of a flag that mysteriously appeared one day in the Al Mamzar area of Sharjah, close to the art atelier that he worked in alongside Hassan Sharif. Kazem did not know the meaning of the flag – did it indicate a forthcoming building project, sand dredging or the demarcation of private land? In response to these somewhat anxious questions, Kazem intervenes in this atmosphere of transience by recording his own momentary presence in the landscape with his body.

Mohammed Kazem (b. 1969, Dubai, lives and works in Dubai). Kazem's work touches on current global transformations in the social, political, and natural environments, and explores abstract ideas about the body, movement, space, and the natural elements.

He has featured prominently at venues around the world, including representing the United Arab Emirates 2013 Venice Biennale, several Sharjah Biennials, the Singapore Biennial (2006), the Havana Biennial (2000), the Dhaka Biennial (2002), and most recently at the Mori Art Museum, Tokyo, in the major survey, Arab Express.