I March In The Parade Of Liberty But As Long As I Love You I'm Not Free: Sharon Hayes 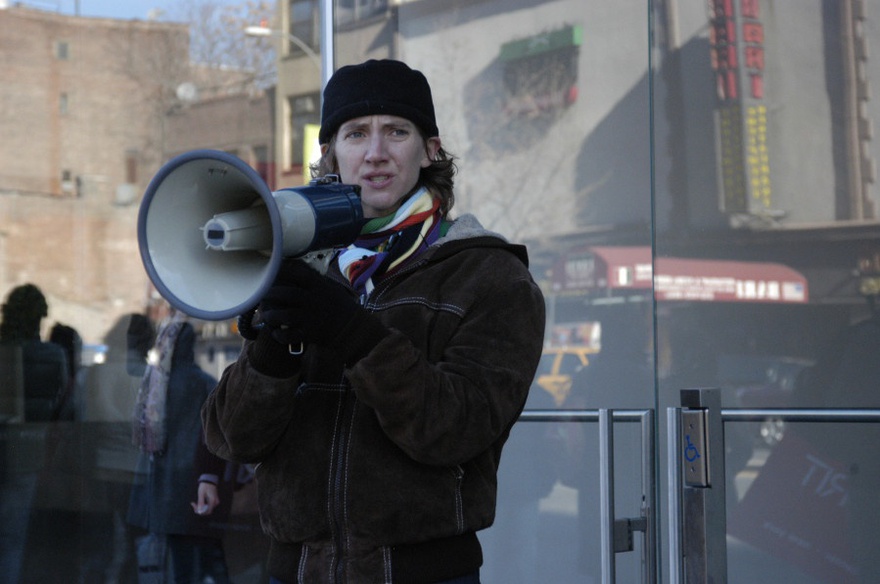 Sharon Hayes, I March In The Parade Of Liberty, But As Long As I Love You I'm Not Free, 2008. Documentation of performance, (New Museum, New York, NY).
Courtesy the artist & Tanya Leighton Gallery, (Photo: Andrea Geyer).

I March In The Parade of Liberty But As Long As I Love You I'm Not Free, was a eight-part performance that took place between December 2007 and January 2008, where Hayes walked from the New Museum of Contemporary Art in New York to sites of public speech such as Union Square, Tompkins Square, Confucius Square in Chinatown, and Christopher Street Park. Describing the work, Hayes writes:

In this work, I stood on the street with a bullhorn in New York City and spoke a love letter to an anonymous 'you'. I look like I'm doing 'public speech' but I'm speaking to a lover who I've been separated from for some reason that the texts don't quite explain. While I'm talking about love and desire, I am also bringing up the war and the way in which the war interrupts and doesn't interrupt our daily lives, our activities, our desires, our love. For me, this work attempts to speak about certain intersections between love and politics that aren't so often talked about. (Hayes)

Sharon Hayes (b. 1970, Baltimore, lives and works in New York). Sharon Hayes's work is concerned with developing new representational strategies that examine and interrogate the present political moment, not as a moment without historical foundation but as one that is always allegorical, a moment that reaches simultaneously backwards and forwards.